WARNING: Extreme sarcasm may be encountered below. Proceed with caution.

Ever read Knights of the Dinner Table? Man if you haven't you are definitely missing out. I don't know what it is for sure about that comic but it makes me wanna game something fierce. Why such a dysfunctional example of gaming, the gaming group and the gaming life should make my gaming salivary glands get all slobbery, but oooh boy it does. 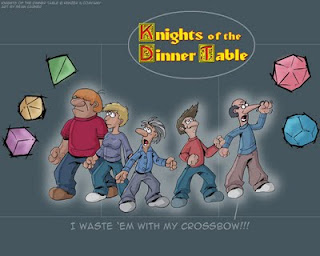 Recently I got an email from a frustrated DM looking for advice. He complains:
"I can't understand how players who have been playing D&D, and an accumulation of other games, including video games, are unable to grasp simple concepts like the physics of falling.
My players, save 1, have been playing with me as their DM for almost 5 years and they still don't understand how to play the game! I think it may be a reflection of my DMing skills or perhaps it because the majority of them like to hack and slash.
I have tried to get them to understand the importance of doing a proper investigation of their surroundings and the importance of checking doors before they bust into the room. I have been overly descriptive and that has failed; I have been less than descriptive and that has led them to walk right out of the room. They have even left dead bodies unchecked.
I currently have them in a labyrinth filled with traps, puzzles, and assorted monsters. I put together this elaborate scene because 2 of the players complained that there was not enough diversity. Now we end up spending an hour to almost 2 and a half in one room or section of the map trying to figure out how to proceed.
I have even thought about sitting them down individually and teaching them how to run their character.
I am looking for suggestions on how to help these people."
Aaaawww isn't that sweet. He's doing every politically correct thing in the book. Sound like a bunch of new schoolers to me--no offense intended : - ) And I just couldn't help myself, so I offered the following sage advice:
"Have any of their pc’s died?

Hate to say it, but a good gruesome heartless death goes a long way towards waking pc’s up. Oh you didn’t check that last body with the antidote for poisonous gas? Sorry, guess you should have checked those dead bodies.
Oh you forgot to check for traps, bet those poisonous darts hurt huh?

Hmmm, you mean that the bubbling and fizzing sound from that green slimy stuff didn't give you a clue it would dissolve through plate mail?! I'll be more descriptive next time ...
Oh that old guy? You mean the one in the bar prattling on about the _exact_ labyrinth that you just _happen_ to be in right now? The guy who was going on and on about and all of it's traps and how to avoid them? Yeah he's the one you told to shut up after he complained about your attempt to pick his pocket. Might of been wise to actually _listen_ to him, eh?
But we don't want to seem too harsh. Allow a death of course only if you have tried all other possibilities/DM tricks to “help” pc’s learn the ropes.

But you can always resort to enforced slavery or imprisonment in the salt mines of Lag Doash.

… can anyone say killer DM? …"
But would they listen? Oh no, not to me. He got all sorts of mamby pamby advice about trying to find out what the party wanted. Make the players happy. Meet their needs blah blah blah. To which I couldn't help but give my one line reply:
"I still don't see what’s wrong with just killing them."
Sheesh, you'd of thought I faded out of existence ... I didn't need to stay on that email group anyway.
Of course it might have been the comic I posted too: 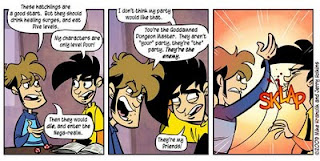 In case you can't read it (bad res) the dialogue goes like this:

DM1: These hatchlings are good, but they should drink levels and eat magic items
DM2: My characters are only level four!
DM1: Then they would die and enter the nega-realm
DM2: I don’t think my party would like that.
DM1: _You’re_ the blasted Dungeonmaster! They aren’t “your” party, they’re “the” party. _THEY’RE THE ENEMY!_
DM2: They’re my friends …
DM1 to DM 2: *SLAP*

It's not KODT, It's Mike Krahulik and Jerry Holkins Penny Arcade, but it is what inspired my advice after all ... ; - )