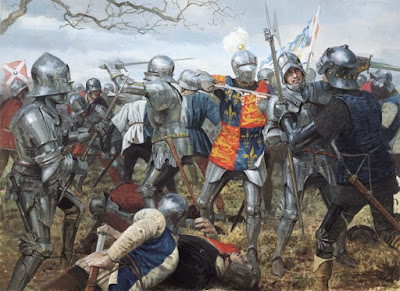 So in my redesign process of A2, I thought I would just limit the fort and dungeon portions to the tournament sections. However, some of the non-tournament sections are important on the story development end of the module, which is pretty important to work in. So I fairly quickly decided to leave in most of the extra bits. I may cut the madman's quarters out, but he could be fun if played right.

I am also beefing encounters up. The fort makes heavy use of hobgoblins and gnolls, but most of these patrols and bands, both as written in the dungeon itself and in the wandering monster tables are far too soft for my party. I have a party of seven fairly healthy 7th level PCs with a decent selection of magic items and spells. Challenging them has at times proven difficult. I have found that higher level monsters alone or in small numbers are not nearly as powerful as I would like them to be. Therefore, I have beefed up both my humanoids in number and strength as well as relying on more powerful groups such as trolls--it is the in TrollBark after all.

But even this has not been my biggest frustration. It used to be, but I am gradually getting a handle on 5e mechanics and design theory to mitigate nerfed encounters. No, what I am really struggle with is room. Room to move and conduct encounters and allow for more than a simple frontal assault in most dungeon environs. We do use minis and a mat for battles and often to guide exploratory sessions. I have always been more of a theater of the mind kind of DM, but as I've mentioned before my players really prefer minis and maps. They have gotten better about mapping on their own, and I usually just draw the immediate relevant environ on the battlemat. But what I've found is that the five foot square is incredibly limiting. 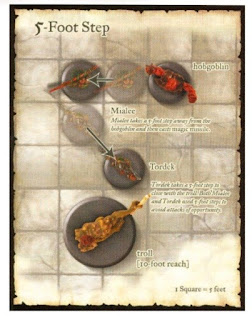 Now, a certain degree of this is due to the fact that we are using miniatures that are based on a five foot square game, and a holdover of 3.5e and certainly 4e that were designed to be played this way. When we played back in the day we naturally assumed that three could travel abreast in a ten foot wide corridor, and even fight as such in certain limited circumstances. We also assumed the ability to move about in combat more freely than five foot spacing rules generally allow. Taking a look at the above map of a 25' x 35' room, it seems very crowded with 3 human sized minis and one large sized mini. Is this realistic? That is a fairly large room by today's standards and yet it seems crowded for even a three person party. Now imagine us playing a seven person party with a wolf companion for the Ranger... Yeah. You get the idea. Again, part of this is the artifact of having minis designed on a base for five foot squares. However, as we go about working out encounters, to the extent that we do use minis, combats seem much less exciting and dynamic than I have been used to in the past.

And take a look at the picture at the top of today's post. Granted it's an artists rendition, but you also get the idea that five feet steps might be a bit too wide if you get my drift. In real life things are apt to get a lot more crowded and dynamic than what the artificial 5 foot grid allows or replicates. for instance, here are some other examples: 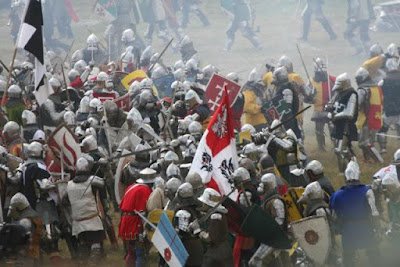 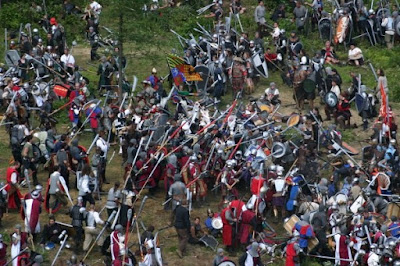 One can easily see in both these medieval combat recreations that actual engagement in combat is not a five foot square operation, but a much more chaotic and close quartered affair. However, I think the matter is best illustrated with this video of the Medieval Combat World Championships on boht sides of the coin, take a look and then refer to my analysis:
Okay, notice how the battle begins. We have, for all intents and purposes a rather large dungeon room outlined by the fence. A roughly 50' by 50' enclosure with approximately a dozen knights on each side. As they approach notice the Polish team in red. They are spread out about five feet abreast and there are ten of them almost in a line. As the time and action permits they are spread at about a five foot square pacing, but it doesn't last long. Once combat is engaged everyone is very close, and it is very rough and tumble. Definitely not a five foot pacing. You can sense how spacious the area is when most of the fighters are engaged. At one point you have seven fighters actively battling in a space no larger than a ten by ten foot area. At no time does this 50' x 50' region seem overly crowded.

One more quick example. Let us take the rather medium sized room above of 25' x 35' and consider what kind of spacing we have available. We have a total of 35 squares to work with. If the room has three items of furnishing we are down to 32. If there are 8 in the party we are down to 24. Let us say we have an equal number of foes in the room to the party (if we are designing a combat challenge) we are now down to 16 unoccupied spaces. That seems like sufficient, but you start having players moving around as well as monsters in an effort to engage and be strategic things start to seem very crowded and limited. When in actuality, though such a room is considered crowded, a fight you might have half of the critters in the room bunched up in a 10' x 10' space battling for their lives. And thus seems alot less crowded.

So, what's the solution? Obviously using minis with a base designed for 5 foot grids is not going to easily allow us to implement some kind of a different combat arrangement. We could go with theater of the mind and allow for closer combat and more dynamic actions and thus not feel constrained by the artificiality of the five foot grid. However, minis have their use, and players seem to like them to clarify what the DMs description my not clearly outline, or that their imagination is not quite able to conjure in enough detail.

So I have been thinking about redrawing the adventure maps and increasing the dimensions by say a factor of 1.5. But that makes the space much, much bigger. For instance a 25' x 35' room becomes a roughly 50' x 40' room. But I haven't come up with any more elegant solutions.
at January 24, 2018 No comments:

Redesigning A2 Secret of the Slavers Stockade 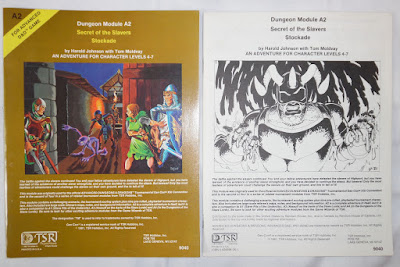 So we just wrapped up the assault on Highport--Slave Pits of the Undercity (A1). It didn't go exactly according to plan, but that's what makes these things so fun sometimes. In case you have been following this somewhat broken campaign arc, we are in the Forgotten Realms and I placed Highport on the Isle of Mendarn. Granted, Mendarn was a slightly more affluent and powerful port than Highport in Greyhawk, but I downgraded it a bit and resurfaced it with a humanoid invasion. And as my last entry made clear I set the Slaver's Fort from A2 in the TrollClaws back on the mainland.

The escapade at Highport ended with the Slavers magically collapsing the Temple and undercaverns in a failed attempt to crush the party. The party notified them rather early of their assault and it was a running battle from that point on. The Slavers evacuated themselves and the slaves before the implosion, however, and were caught by the escaping characters at Tymorra's docks where they saved about half the slaves, burned a slave ship and defeated the bulk of the slavers if not the top guns of the enterprise thus far. They are still chasing Neznarr from Phandelver along with his cohorts, Halia the betrayer of the Lord's Alliance, the Slave Lord assassin from A1, and a myserious elemental controlling drow sorceress.

At any rate they are about ready to return the slaves and set out for the Troll Claws. However, I am struggling with the tight design of the fort and the close quarters of the adventure as a whole. Though I like the basic premise, and truly hope my players are sneaky and choose the more surreptitious entry we'll see what happens. That and I have a rather large party of 7 players and one wolf companion. Accordingly I have decided to give A2 a close read and a redesign to make it more suited to my party. I am thinking about defaulting to the tournament maps for the adventure, but am going to need to do some remapping regardless. I'll keep you informed as I go, along with the changes to encounters and stats yo give you an idea of how I'm approaching it.
at January 23, 2018 1 comment: