Matt Finch, a star of the old school renaissance if there is such a thing, and co-author of OSRIC and author of Swords & Wizardry has shown his game design ability and his acumen in regards to old school gaming time and time again. Though I only know him by reputation, reading his opinions in interviews, his comments on social media and above all his products I have come to deeply respect him. Gary Gygax he is not, but nonetheless he is much, much more qualified and knowledgeable than I to opine on the differences between versions of the various flavors and expressions of D&D.

It is with this in mind, that I would like to "guest host" his work in the form a link to a blog post he made about a year ago. In this post he quotes a response he made to a review of S&W in a Facebook discussion. The salient point here is his explanation of the differences between what is old school D&D and B/X D&D. Now granted, he is talking about a clone of B/X, Labyrinth Lord --and a quite good one at that-- but the way in which he describes the difference,

"Labyrinth Lord, which is a clone of Moldvay Basic D&D, tries to reproduce an approach that was (at the time) quite the opposite of OD&D -- namely, an emphasis on a more elegant rule-system that was internally very complete. Still open-ended and designed on a concept of a high level of DM fiat, but without the need to house-rule any fundamental portions of the rules (such as initiative)."

sheds light on the recent thoughts I've been trying to work out for myself. It is true that B/X, even as early as Holmes, and certainly by the time of Moldvay/Cook we are beginning to see the codification and formalization of the rulesets. In point of fact all of the B/X lines had the express aim of making the game more approachable, easy to understand and a way of easy entry into the game. This required a ore formalized system. What Matt points out is that the clones have gone a step further and made the systems "elegant".

Now, this word, elegant, is a very apropos word to describe something simple and easy to understand. In fact, in mathematics a proof is considered elegant if there is no simpler or more clear way to state the truth of it. And this point, that the clones went in the opposite direction of the original rules is profound. For if you have followed my reasoning, and some of the rebuttals to my reasoning (Josh Dyal has been quite skilled at the debate) then the crux of the contention has come down to whether 0e or AD&D was the progenitor of the subsequent editions of D&D. My contention was that AD&D stood alone or apart from all editions in the codification of its rules. That this was the reason Gygax said it was "different" than all the others. For there was no real way in which it could have been. What Mr. Finch does in his response to the reviewer is point out that all subsequent editions have been an effort to formalize the rules--to state them more clearly, simply and elegantly.

In a response to one of my posts Josh said B/X D&D post Mentzer became "bloated" with the RC. He is right. This is the same thing that happened to AD&D, to 2e, and to all subsequent editions of the game. The "tightness" of the rule set continued to increase to the point of 4e, one of the tightest written version of D&D I have ever played. It was an incredibly elegant game, but it was not heir to 0e. And, if I'm not incorrect, this was at least part of Josh's point.

As I have worked through the argument in my mind, I think AD&D was a more codified approach, and a more formalized one. It was not, however, elegant. That was a part of its charm. Its quirkiness, its baroque compilation of components, growing vine-like into the dark corners of the fantasy genre. And just how much  Gary meant it when he pushed the idea that AD&D was either played right or wrong is hard to know. The quote in the Foreword mentioned earlier today alludes to the spirit of the game over the rules. I've written about this before, and honestly, I'm still not sure what it means. Gary also writes about this spirit in RolePlaying Mastery. But it seems that the spirit of AD&D can only be defined as "you know it when you see it" rather than some actually clear cut form.

My idea that playing the game with greater adherence to the rules unlocks the treasure chest to that spirit is something I'm still intrigued by however. I'm just less sure what it means than I was previously.

What I am more sure about is that WoTC D&D from 3.5 on has not followed the traditions of 0e. Matt has helped me to see that in his exposition of what that old school spirit truly was. What these later editions did was create ore and more elegant systems through which to express what they saw as what D&D should be. 5e is no exception. And though WoTC's designers went back tot he source as it were, what they came out of the dungeon with was a treasure of ideas on how to make an elegant system of what they feel encapsulated all D&D has been, with a few new twists. However, the level of its elegance and if it fits the bill for those who actually played those old games is something else entirely.

Which brings me to myself again, what the hell does all this mean for me? I never really played 0e, but I did play a 0e flavored version of AD&D. It was never RAW, and I'm not entirely sure if I played it that way it would feel like the game I played back in the day. This was what Steven Warble was saying when he reminded me, "As someone who has been playing since 1977 I disagree with you. Even while Mr Gygax preached AD&D orthodoxy from his TSR pulpit, the players around the world did the same as you - played AD&D mixed with house rules, D&D, home systems, etc... "One True Way" -ism was quickly defeated at the game table."

Maybe, you're right. Matt, Josh, Steven, and Mr. Kask, who Josh quoted, and Gary himself when he wrote that Foreword ... I must admit, I'm still confused. I mean Gary wrote that article in #26, and he said some rather unequivocal things. Just how much I can rely on those words, or any words as the final arbiter of what is or is not D&D or even AD&D is more in doubt than ever. And I suppose I should quit trying to do so. Perhaps my own confusion, so evident in the recent blog posts, is evidence enough of that. 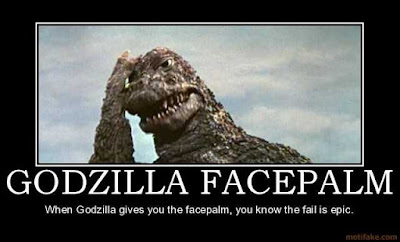 So, I was reading through the Dungeon Master's Guide and came across this quote from the afterword on that page with the now famous and racy drawing of Darlene's succubus, literally the last word in the DMG,

"IT IS THE SPIRIT OF THE GAME, NOT THE LETTER OF THE RULES, WHICH IS IMPORTANT. NEVER HOLD OT THE LETTER WRITTEN, NOR ALLOW SOME BARRACKS ROOM LAWYER TO FORCE QUOTATIONS FROM THE RULEBOOK UPON YOU, IF IT GOES AGAINST THE OBVIOUS INTENT OF THE GAME, AS YOU HEW THE LINE WITH RESPECT TO CONFORMITY TO MAJOR SYSTEMS AND UNIFORMITY OF PLAY IN GENERAL, ALSO BE CERTAIN THE GAME IS MASTERED BY YOU AND NOT BY YOUR PLAYERS. WITHIN THE BROAD PARAMETERS GIVEN IN THE ADVANCED DUNGEONS & DRAGONS VOLUMES, YOU ARE CREATOR AND FINAL ARBITER. BY ORDERING THINGS AS THEY SHOULD BE, THE GAME AS A WHOLE FIRST, YOUR CAMPAIGN NEXT, AND YOUR PARTICIPANTS THEREAFTER, YOU WILL BE PLAYING ADVANCED DUNGEONS & DRAGONS AS IT WAS MEANT TO BE. MAY YOU FIND AS MUCH PLEASURE IN DOING SO AS THE REST OF US DO!"

Right there in all capitals, the final words of the book. How did I forget that? Why did I not consider it in light of recent discussions on my blog? I think it's time to do so ... 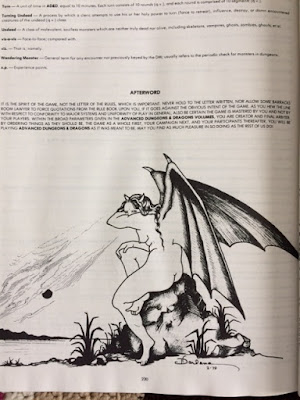