Have I ever told you how much I love Greyhawk Grognard? Well, yes I have. From his incredible and expansive Greyhawk knowledge, to his creation of the amazing Adventures Dark & Deep, probably the closest AD&D could have been variant ever written. I just really like his work. I also admire his endurance in the blogosphere, the quality of his posts, and his ability to finish the projects he starts.

Recently in my email in box the most recent post of GG popped up. He had posted the first back of the envelope scribblings of a campaign he was designing. Not really knowing what he was doing exactly--GG is a long time Greyhawk DM, as in it's the primary campaign he runs--I read through the entry. I was immediately smitten. The very old school way of doing what he was doing, and the clear window into the design process was not only revealing it struck a chord in my heart. Since I design almost exactly like he does in this early stage I felt an immediate affinity for what he was doing. So often in today's gaming world one can feel incapable of tackling the job of such work as campaign design, adventure design, world building and heck even character creation when so much of the industry represents only its finished products.

We have become so sensitive to "inferior" production values that few designers ever get out of the gate. And here we have a GM who is a recognized, published game designer and writer of products with high production values, showing us inside what we essentially have been doing in this hobby since before 1975. I was enchanted.

Not to mention the campaign shows enough cool seed ideas to peak even the most jaded players' "that would be cool" spots. The thing is, I have notebooks jammed with ideas just like this, but most if not all are "unfinished" in one form or another. I, unlike GG, do not have the same finisher ethic. Which is why, when I finished reading through the email and stopped by his blog I was excited even further.

I'm slow at getting news, but evidently there was a website that had sought to copy NaNoWriMo's success but in game design. Nation Game Design Month aka NaGaDeMon (is that a cool name or what?) appears to be defunct this year sadly. However, GG had participated back in 2011 and been successful at producing a rather neat wargame. That alone was enough to excite me, since I've been secretly working on a game concept in my underground lab for months now. Unfortuantely, I can't say any more about that--don;t worry, I won't finish it ... But what GG has done is take that same spirit and created NaCaCrMo! Yeah, not as cool of a name, but wth. Nation Campaign Creation Month is what GG is informally calling his efforts this November and yesterday's post was his first efforts in that vein. Is that cool or what?!

Now, I have already started my seed idea for NaNoWriMo, I'm growing out my moustache for Movember, I'm trying to finish my game for NaGaDeMon, I'm celebrating National Native American Heritage at my largely tribal school and now I'm designing a new campaign for NaCaCrMo! Let the festivities begin! I think I'm going to ask for my two week vacation this month ...
at November 02, 2017 No comments:

Why Stranger Things Hits All the Right Notes 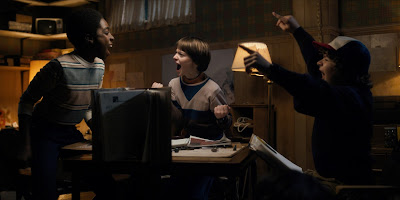 It's not just the Dungeons & Dragons. Though certainly it is a part of that, a huge part of that. The cultural reference of the game that has made such a huge impact in my life is a sure fire way to get my attention. But it took season 2 of this Netflix smash hit to really make it clear to me: it isn't just D&D. It has also helped me realize why I am so loyal to the early editions in the games' development.

It's all the cultural references. I watch this series and am literally transported back in time. The music, the clothes, the tech references, the movie call outs, the setting generally, it just all serves to transport me back to a time in my life that is filled with enchantment. The show is a veritable smorgasbord of nostalgia. More than that, though, it takes this nostalgia and makes it relevant to today, it makes it timeless.

I loved how in season 2 (slight spoiler alert) the new character Bob uses his knowledge of BASIC programming to save the day when they are trapped in the lab. Somehow managing to make it seem new and relevant to the time as well. Despite the fact that such a hi tech lab might have used a more updated program, the fact is it just rang with truth. The computer classes I took in high school were all BASIC programming classes. And the only two other programs I knew about at the time were COBOL and FORTRAN. Either way, it was a brilliantly executed scene and exactly the kind of nerd time transport I'm talking about.

In today's world it is increasingly difficult for 70's and 80's nerds to be nerds. Nerddom is so much wrapped up in the popular media and fandom that it is not even considered sufficiently nerdly anymore--it is just popular culture. The fact that a show like Stranger Things can even exist is proof enough of that. Which brings me to my second point.

Why do I like AD&D so much? The same reason I love BASIC, and ATARI, and the original Star Wars trilogy (so much better than all the others) and 12" GI Joes, the original yellow and black suited X-Men, and lead minis. Nostalgia. Okay, maybe not exactly the same reasons, but damn close.

I currently play 5e (slightly modded for old school) with my kids, two family friends each Sunday night and we all love it and have a good time. Yes, I would rather be playing AD&D. Truthfully I would also like to be playing with my old high school gaming buddies too, but am I missing something? My kids love comic books, Harry Potter, all the Star Wars movies, the new Star Trek movies and TOS, and they love playing Dungeons & Dragons, my eleven year old daughter just told me game night is her favorite night of the week along with her gymnastics practice night.

Do I dare let my grognardly nostalgia interfere with their Stranger Things days right now? Wouldn't I have loved it if my dad played D&D with me? The one time we sat and had an extended conversation about how to start my own campaign world is one of the most memorable conversations we have ever had, for me at least. He took the most recent copy of the Austin American Statesman newspaper and drawing from the headlines helped me plan out a land of nations divided by a huge chasm, where one side of the chasm were really poor hard working folk and the the other side were richer families who used the poor to work for them with the idea that their increasing prosperity would serve the poor as well. But the poor weren't prospering and what's worse the middle class where being forced across the divide. This led several factions of the poor to ally with various monsters in their bid to defeat the rich, and over throw the nobility. It was much deeper than that with all sorts of side plots, but basically it was my first campaign and the only one I have ever heard of built on Ronald Reagan's idea of trickle down economics.

What memories will my kids have with me and our games? And what will they think if I crap all over the new Star Trek movies, or how Marvel and DC are crapping all over canon with their new film releases? Or how I cant stand digital comic books? No, I need to relax, and be the supportive one in their days of geekdom. I'm sure when they grow old they will begin to feel like me. They will curl up at night reading their old 5e players handbooks pining for the good old days and they too will have sweet memories that can be conjured up by shows like Stranger Things.
at October 31, 2017 1 comment: