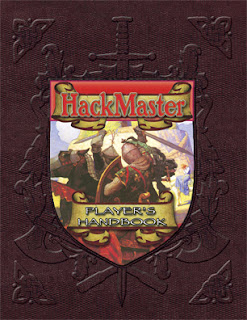 I finally laid down the greenbacks for this puppy. And man, even the PDF is a work of art. I can't wait to get my hardcopy. But reading this has even made my reperusals of the AD&D books take a back seat for awhile. I will take the time to do a play by play occasionally--I'm not really a very good review writer, but I'll do my best.

I've gotten through the race section and into classes and am realizing why I love Hackmaster so much, every time I read it. It reads almost exactly like Advanced Dungeons & Dragons but more fun to read, and more detailed than the 1e books were. It has the old school flavor of my gaming style down pat, and that familiar feel I am so much in love with.

Just a few highlights, beyond those I've mentioned in the past, which are well preserved here (the ethos, the tone, the zero to hero scope, etc):

I love the racial descriptions. The Grel stood out to me in particular as I was least familiar with them. I hadn't recalled them standing out so much for me in HM 4. But their description as a sort of warmongering-psycho-wild elf type was absolutely engrossing in the new book. The Grel purpose due to their background and history in relation to the other elven races truly came to life for me. I would love to game with this race in my world. If I have a player brave enough that is. I also love the HM take on Drow, which is much more apropos (imo) of the role they played in the elf wars. And if you think about it much more serial killer in mentality. The tortured, reclusive, misunderstood types that turn to the shadows, and torturing small animals to feel good about themselves. Much more drowlike in my opinion.

And I'm thrilled to see that Gnome Titans and Pixies made it into the core book (though pixies are in the appendix). These were two HM staples I didn't want to see left out. just strange enough, just over the top enough to suit my gaming style and carry that HM tone home.

I also love the idea of having Knights and Paladins specialized classes that can only be taken by higher level fighters after proving themselves worthy. This concept (I wonder) was borrowed from the 1e UA Cavalier types that had to stat at up to negative third level before they hit first. This made so much more sense to me--even though in the UA it was mainly tied to social class--than just giving a first level PC all that power. And it keeps these classes special. So few will get to these heights, that when and if they do it will really mean something. I mean by the time a PC is a Pally, he is some butt kicking kind of awesome. Though he might be a bit of a pain with all that massive honor, prestige, and strict code of conduct strapped on tighter than his armor. But this, I say was a brilliant move.

Lastly, and more generally, I have to say how much I truly feel at home with this book. I mean it has become very much its own game, Hackmaster. It did that really in the the original game, and in large part due to the flavor it took on through the pages of KODT. There always being an interchange of rules, inspiration and game development back and forth between the game and the magazine. And as pointed out in the history of the game, Advanced Hackmaster came about not only due to the expiry of the license, but also because the game had grown to need it's own expression of rules. The AD&D framework was just a bit unwieldy for what HM had become.

When I first read this, I'll admit to feeling a bit disappointed. I mean one of the reasons KODT and HM were always so awesome, was because they were based on AD&D. But even AD&D didn't quite capture the essence that was the HM world. HM had begun to symbolize and embody a certain style of play, certain assumptions about what was right and wrong with gaming, what was good and bad in the RPG world. And it made a bold stand and statement based on a view of old school principles. Hard hitting, no holds barred real life or death gaming. Balls to the wall, riding the edge, and laughing maniacally all the while. That was gaming in the HM multiverse. Now, admittedly it was not the only way to game. And AD&D could certainly be played in lots of other ways. And some might argue that AD&D wasn't the perfect tool for this expression anymore. Hence the rewrite of HM.

But you know what, HM feels like home to me. Feels like home almost more than AD&D does. HM has always captured a certain feel of gaming that I was always very much at home with. It was the way I gamed. So even though HM has broken some new ground in rule development, especially with their fast paced, gritty and realistic combat system (the biggest stumbling block for some people) it suits that style of gaming better than anything has yet done. And yet, it still is very true to its old AD&D roots, with the assumptions of the game built into the spirit of that game by the founders themselves.

I've been bemoaning my fate lately of not having players to play with. And with a recent promotion possible at work it looks like I may not even have my school club anymore. It was time to take action. My gaming possibilities were slipping away from me. So just yesterday I started to gather some guys together outside of my school club to start playing a long term game in our neighborhood again. Some are teenagers, but two are adults (father and uncle of some of the teens). I'm very interested in playtesting HM, to get our feet wet, and see how the combat system really runs. It's the one thing that is newest about the game and so requires some getting used to.

Yeah, we could play AD&D or Castles and Crusades or even give 5e a whirl. But for how long now have I been ogling Hackmaster. Every time I read a HM book new or old, read my KODT issues, or get on the KCo site I'm wanting to play HM so bad I can taste it. So that is where we'll start.
at June 23, 2012 5 comments: