Do I Really Need All These Numbers?

Yeah, I'm pretty open about my gaming angst. I figure I might as well be honest, and not strike some sort of false pose about my gaming. But as you likely have already figured out if you follow my little blog--I have a hard time making up my mind. I haven't really mentioned this in my increasingly long "about me" page, so I figure a bit of explanation is in order.

There is personality test called the Meyer's Briggs personality type indicator and I've taken it dozen's of times in at least three different forms. I've even paid to take an official one from a career counselor. And I test the same every time, very strongly INTP. Now I won't go into details about this (you can look it up if you want), but suffice it to say that INTPs revel in analysis of all sorts. A strength of their personality is in being able to clearly see all sides of a given issue. But this strength can also be a weakness in that they can have an incredibly hard time deciding on things. They are very literally plagued by the potential that there is no real right decision--all decisions can be justified, at least in theory. Hence just one of their difficulties in making a definitive decision.

So I don't pretend my gaming journey is a lot like those of other peoples'. INTPs only make up about 1.5% of the population anyway. No, this is just one guys observations about how gaming affects me personally. So please remember this when considering my thoughts in light of your own gaming preferences.With that little caveat out the way, check out my 1st level Pathfinder character sheet: 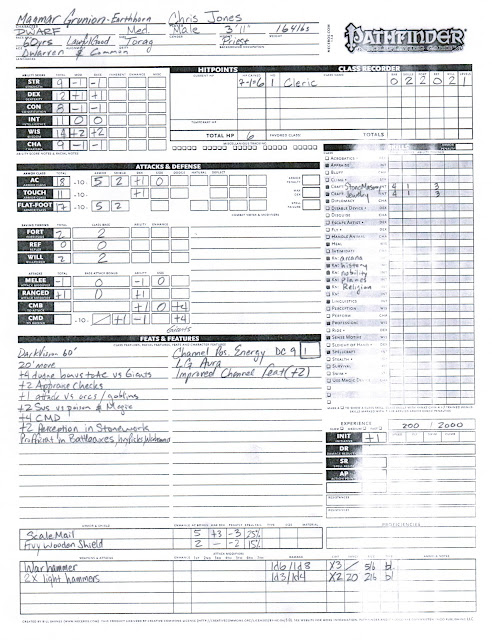 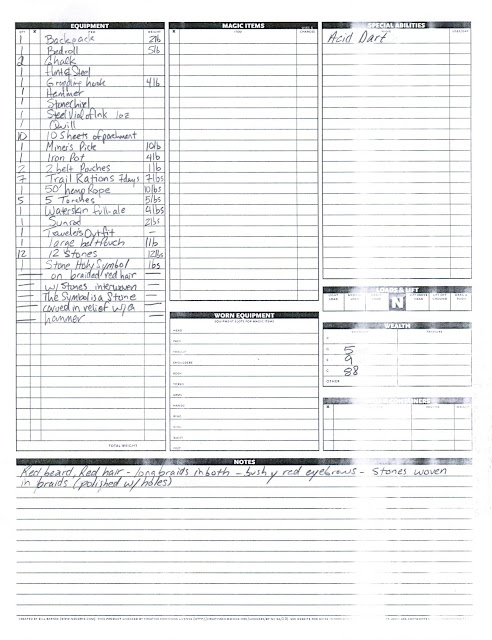 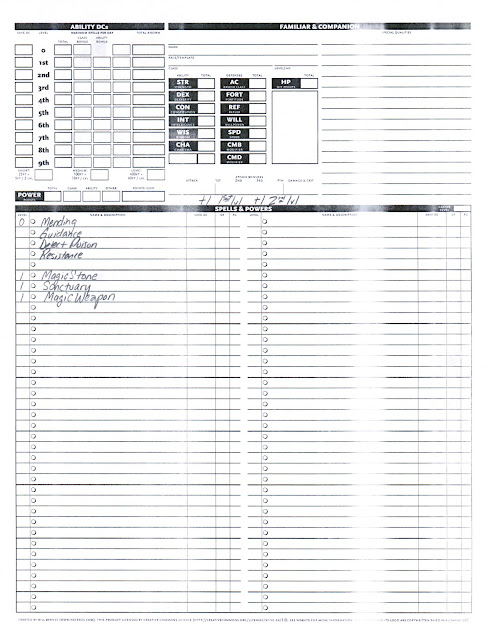 And lots of numbers. I know that a PF character sheet is designed to help you calculate all your essential mechanics, and that accounts for all the numbers. I mean really you don't need all that crap. We certainly didn't need it when we were playing AD&D. I recall the majority of PCs we wrote up looked something like this: 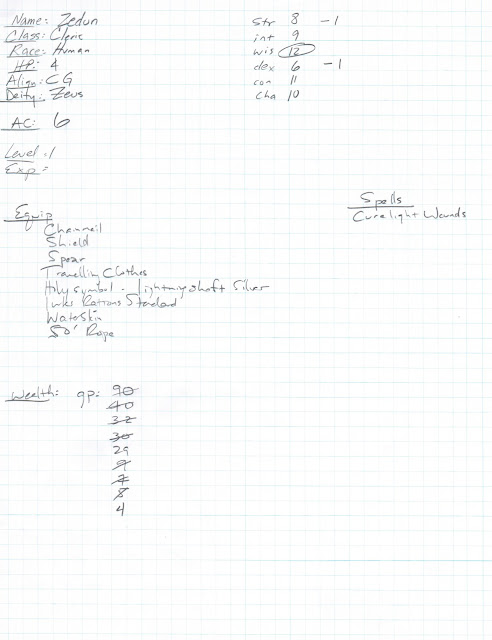 And just to have fun, I had a fellow GM time me as I created this PC. 3 minutes, 41 seconds and some change. Wow--big difference there. Okay, that's not entirely fair--I have the AD&D core rules practically memorized from so much play long ago. I'm still having to look up all the PF calculations and modifiers and such. But still ...

Now, to be fair, after we had been playing AD&D for awhile we started getting into character booklets. Lots of background information and the like, extra info for character description, and as we advanced in level info for places of residence, strongholds and adventure histories. But that was all extra--nor really needed. So to thinking how concise could a PF character sheet really be? First I took a look at the PF box sheet PC record, and that was a dissapointment. Lots of info on there for beginning players--too much if you ask me. That left it up to me, and this is what I came up with: 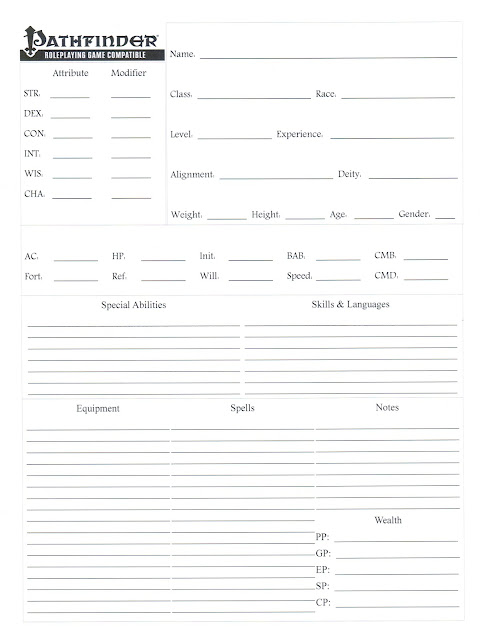 Granted, this sheet really assumed that you know the way to calculate all your essential stats. And it still has saves on your sheet--which most AD&D character sheets I used never did.  the GM could look this info up, and it varied little from PC to PC. Not so in PF. Players need to keep track of their individual saves, BABs and other numbers. But all pretty much there on one sheet. You may have to look some things up when you make a PC, but isn't that what the books are for?

And yeah maybe when you advanced in level some, you will probably want a more detailed sheet. Then the PC sheet will be more like an AD&D sheet without all the little formulas cluttering up all that valuable space. For low level PCs this should be plenty.

So what's the point here? We I'm  really sure except I don't like my PF's PC sheet. And I'm wondering what the purpose for the crap that clutters most commercial PC sheets. And frankly AD&D is no exception. The old PC sheets you could buy from  were just as bad, and also indicative of the crapload of rules that had begun to clutter the game. Never liked those either--always made my own. What I've really begun to wonder is whether such sheets are a clue as to the nature of the game, and why really early games, and their associated clones like LL, S&W and others take pride that the PCs can be recorded on a single 3x5 card.

And if you ask me there is an important lesson to be learned from that. We don't really need all that crap. We can streamline so much of the game and in so doing foster a style play that is much more lite, fast and flexible. And as Stephen Chenault and the Troll Lords have pointed out, therefore more creative and driven by the participants' imaginations.
at February 17, 2012 5 comments:

Stepping to the Other Side of the Screen

Played my first game as a PC in Pathfinder yesterday!! I played Magmar Grunion a Dwarven priest of Torag, and the GM was nice enough to let me jump into the game. For those of you who don't know, I run the RPG club at the Junior High School where I teach, and recently turned over the reigns of one of our games to a student GM.

You may also not know that I have been struggling with whether to move to an edition I really feel is closer to my heart--in my case Swords & Wizardry--or whether I should seek some sort of balance between the way I would like to play and the games of this "new game" world. And by "new game world" I mean the gaming industry post 1999. There have been a lot of good things come into the gaming world in the last decade and a half, but we also have adopted some trends that don't harmonize well with my desires or my play style.

Recently, however, I began to think that maybe I wasn't seeing things from a balanced perspective. All my game analyses were from a GM's perspective--since I am always the GM. I hadn't played the game as a player in a long time. Was I even comprehending my player's opinions of the game? Thus was born Magmar, and my first chair on the other side of the screen in quite a while.

Now, to be fair, I don't want to jump to hasty conclusions--this was my first Pathfinder game as a player. But I have noticed a few things right off that answers some of my earlier concerns. For instance, I had experienced quite a bit of frustration with my players not working together, not thinking things through, acting rashly or just downright stupidly. I was able, without being too pushy I hope, to mitigate quite a bit of this much more easily on their side of the table--as a party member. This was a real eye opener to me. And if for no other reason than this, taking some time as a player will be well worth it. This way I can model good playing for them. They are after all rather young players and new to Pathfinder and RPGs in general.

I try and let them lead the way, playing a rather stoic but LG dwarf allows me to assume the role of the sort of wizened adviser who only jumps in when absolutely necessary. But don;t get me wrong--Magmar hates evil and won't hesitate to jump in the fray when he considers it the best choice. They have really enjoyed my roleplaying antics thus far.

As to the actual perspective of the players: my thoughts are very tentative at this point, but a few other things come to mind that bear on my current concerns.
Now, what all this means is uncertain to me. As I said I'm still absorbing it all. I want to play another couple of weeks at least before I decide that players really "need" (in the sense that it is better for players) more options. That, as a player, I would like play better with more options. But right now, my step from behind the GMs screen has been enlightening to say the least.
at February 15, 2012 2 comments: 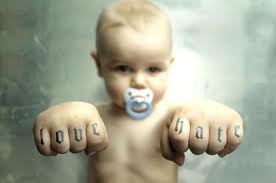 I've been thinking all weekend about my feelings and passion in my last post. I also wondered about a sniggling little detail I seem to have overlooked. Allow me to elaborate.

I am the GM. I have always been the GM. Since I introduced my friends to the hobby it fell to me to GM, and thus I did, for years. I mean I played occasionally, with emphasis on "occasion".

And this got me to thinking. I have been taking things from my perspective all this time. And that perspective is decidedly GM oriented. What was it even like to be a player? Could I even say I knew? I mean I have never even played as a PC in Pathfinder. The last game I played in was 4e--for two sessions. Before that, it was a 2e game about four years ago for about a month or two. Before that, not since 1991!

And it began to sniggle away at me that I was looking for a game I wanted to GM, not necessarily that my players wanted to play in. When I asked why my plaeyrs like Pathfinder they always talked about the player options. They love options, feats, multiclassing, skills, ability increases, class add-ons, prestige classes, lots of races, new races, classes classes and more classes--with new and nifty stuff preferably.

If I am in control of making everything up, I still get a lot to play with, but what do they get? 4 classes and 4 races. The same every time, except for player background they might add in. The only new stuff they get is what I choose to create or approve that they create. And that only as it is carefully doled out to them.

So I began to wonder if I was looking for a GM oriented game and my players wanted a player oriented game. Rules lite, flexible and fast systems cater to GM creativity, not player options. Now, one might be tempted to say players can do anything they like in such a syste4m, but we all know that isn't true. Who gets to decide if it happens or not, or how it does happen? The GM of course. Unless the player knows ahead of time what rules and mechanics govern the things he might want to do, and can plan and act accordingly. Then the GM has relegated some of his power and control to the rules, but the rules extend that power and control to the player.

And I can't help but ask if that is a bad thing? Meta-Power-Parity should be good for everyone concerned and certainly involves the player more in the game than in games where the GM controls all of creation and most if not all of the rules.

Hmmmm .... Not sure exactly what to make of this, but it certainly deserves more thought. More later if I can come up with any answers.
at February 13, 2012 5 comments: