Let's Tell a Story Together ... Not Argue Over Rules

"Sometimes when you get the mechanics of the game out of the way -- rolling the dice, keeping track of what your carrying--it's almost like your there." He lifted his head and smiled. "And that's something. How often do you think I'm going to get the chance to, rescue a princess or slay a dragon?" -- Karl Cullinane in The Sleeping Dragon by Joel Rosenberg 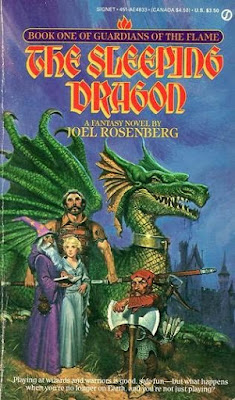 As I've reconsidered what I recently wrote in regards to why I game and what I want from my gaming sessions, something has repeatedly come to mind: the story. The narrative that unfolds as DM and players interact within the game world is what keeps me coming back again and again to the table. Story is, I believe, the heart of what makes gaming so satisfying and positively absorbing. As Joel Rosenberg makes Karl say in the book above--the idea is to have the mechanics recede into the background and to actually be there in the game.

Games that prohibit my ability to achieve that are games with which I quickly grow disillusioned. Though I didn't know it until I had been made to stop and think about it, that was the real reason I became disillusioned with 4e and Pathfinder--the excessive intrusion of the rules and mechanics into the game. Which is not just about combat alone, but also the plethora of rules governing character ability, power and development.

Recently in a gaming discussion I was reminded of something I had felt long ago, and have even written about here on this blog. That the multiplication of rules comes from three main sources:


Occasionally realism is also posited as a source of rules extrapolation and this too has to be carefully managed. Gary Gygax himself mentioned this in the 1e DMs guide and his work Mastery of the Game. He warned that combat could devolve into an endless tedium if consideration was overly given to realism at the expense of maintaining the high action of fantasy adventure--the reason we game int he first place: adventure! Those who all desire such realism, should be all means seek it out. It has much in common with strategy games and the D&D's wargaming roots--but that is not why I game.

Which leaves the idea that we should avoid danger or death, and or "be more powerful" either for self aggrandizement, the desire to avoid death, or the desire to play a superhuman. If you do desire to play a superhuman, play a Supers game. Supers games have very different purposes than fantasy campaigns, but I suppose it is possible to blend the two. And I must say that a group desiring to play a supers fantasy campaign can do so without any argument from me--it's just that I don't play for that purpose. The desire to "do more" to play a more powerful character, a super-like character, then is a certain valid approach that may lead to rules proliferation. Nothing inherently wrong with this mind you; and it isn't even required as there exist all number of high power, rules light games out there. But this is a "valid" reason--just not one I am interested in. So I set this one aside.

The other reason, desiring to avoid death, is not valid. Allow me to explain. Rules exponentiation that comes from desiring to avoid death can come from two sources: death-dealing DMs and stupidity of players. Both of which should be avoided. The first of the two was more common in my day. The innate power of the DM in a roleplaying game is a temptation to the egotistical to simply lord over and control the other players. This should obviously be avoided as well. Leave such games post haste, as such people are dangerous for more than just your character.

Most players learn that certain actions are bad and should be avoided--most, but not all. If you player is dying repeatedly in a game, ask yourself: Am I doing something stupid? Am I forgetting to check for traps, rushing in where even fools dare to tread? Trying to carry too much of the party weight? Not working as a team with my party? Trying to take on powerful monsters too soon, or adventuring where they live? Not playing my character's class like it is supposed to be played (i.e. a thief trying to lead in combat, a magic user going toe to toe with monsters, etc)? If you are not sure, watch other players whose characters are not dying all the time. Take their advice and look for input when your character takes actions. Things should improve over time.

However, if everyone in your party is dying all the time; if the causes of your deaths seem unfair or imbalanced a lot of the time; if you find yourself continually in no win situations; if every effort your character makes is thwarted by exactly the right kind of challenge--these may key you in on the fact that your DM is being unfair. If this appears to be the case, it should be a topic for after game discussion with your fellow players and possibly with your DM. Don't assume your DM is a killer DM. She may not even know that she is being unfair or biased--it happens. Sometimes all it takes is bringing it up. She might be able to adjust play some to make the play more fair and balanced. It also gives her the chance to defend some of her decisions and reasoning. Or, perhaps someone else needs a go at DMing. If however, your DM gets very defensive, offended or is reluctant or refuses to give up the reigns for awhile, that too could be another sign that they may be too comfortable with the over-use of the power they wield over the players. Find a new game in such situations. The game should be fun--otherwise your not doing it right.

Now, this second scenario can happen in any game--regardless of the rules. However, some rules have arisen to attempt to spell out each situation that might arise as a conflict or challenge a character might face in an attempt to take the adjudicating power away from the DM. The rules assume the DM can't handle this power and will misuse it, and that the other players need that safety net to keep from them from DM unfairness. In a sense some rules are designed to preempt in unfairness in the game. But this takes away an innate quality of the game that comes with DM flexibility--creativity. Hem a DM in too much and they can lose the element of creativity and improvisation that contribute to the story in amazingly powerful ways. The DM was required to be fair as a pat of her role--the very reason they were also originally referred to as judges.

Now, I'm not saying rules proliferation itself is bad--although I truly wonder sometimes. What I am saying is that an unnecessary multiplication of the rules that can slow down play and interfere with the story being experienced by all players--the DM included.

To conclude today I consider a quote by Gary Gygax himself:

"The secret we should never let the gamemasters know is that they don't need any rules."

Gary was big on secrets. It is one of the things that probably made him such a great DM. But why should DMs never know this? Well, apart from being melodramatic, I think it's an allusion to the commercial needs of TSR, Several times in the early versions of the game it was repeated again and again that they--the game designers--shouldn't do too much of the imagining for you. The game was designed to open the doors to your imagination--not constrain it with rules or content. We are, however, a lazy species, and gamers were no exception. We'd much rather wait for Gary or Dave or other writers to entertain us with their imaginings instead of create our own. But if they let that be their business model they couldn't make more money! They needed to produce modules, more expansions, more classes, more campaigns, more rules, rules and more rules! Not it wasn't that simple--and they obviously knew the real power of the game because they mentioned the need for participant creativity as an essential element of the game. By doing it for you they were taking something away from the game. But practicalities precluded the continued embracing of such a model and it became the inner "secret" we could never let out of the bag. But by that time, they also knew that regardless of this being the "secret" most of us, would remain little chicks hungrily squawking in the gaming nest for the next creative morsel the designers would regurgitate into out awaiting beaks. So many of us never broke out of the brainwashed masses to do our own thing. Well, I know I didn't, and I know a lot of others in the early 80's who didn't. Some few of the original players of Original and Classic D&D stayed true, because that was the only way they knew to play: that the original rules were a rough toolbox of what could be--not what had been decided from upon gaming high. The original rules were a rough outline of a way to tell a story together and experience it in a way seldom before experienced. By the 90's that vision had been by and large traded in the rules they let us have. When, all along the secret was we didn't need any rules at all--at least very minimal ones.
at July 03, 2015 No comments: