I Have No Idea What I'm Doing 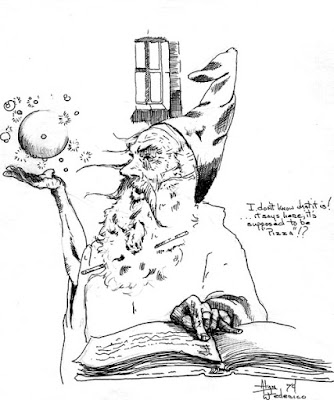 So ... new look? Yeah well, sort of. Truthfully, I have no idea what I am doing. The last six entries I had planned for the blog have been relegated to eternal draft-land, with no idea of when an actual post might appear. Part of the reason for this is my own confusion about where to take the blog and my future online gaming presence.

I recently went through a rather self reflective period in my gaming due to a disagreement in my game group involving rules and editions. I contemplated trying to return to what I love to do--go back to simply gaming old school 1e. I also contemplated taking a break from gaming altogether. I thought about breaking my group up. I even thought about writing my own game--again. In the end I settled on the fact that right now I'm playing 5e. My group is growing in more ways than just number of players at the table. The gamers I am, playing with are all invested in 5e and say they are enjoying themselves. With that in mind, I decided I was just going to give myself over to playing 5e, and playing it well.

I have been running a rather rules-less version of the game with me making up rules on the fly based on my previous knowledge of 1e, but that was no longer cutting the mustard. Time to really start to play this game the way it was designed. Yes, it's a pretty flexible game to begin with and even me making rulings hadn't actually broken anything. But I had not truly given the game itself a fair shake. It was time to do so, and with my current group it was the right thing to do.

So where did that leave my blog? Where did that leave my theorizing and philosophizing which are decidedly seated in an old school ethos. Was I to try and "OSR" the 5e rules? Hadn;t that been what I had been unsatisfactorily trying to do for the past two or three years? I was not going to run that treadmill again. No, even though I am old school gamer it was time to admit I was not successfully playing "old school".

I can't say I won't play an old school edition in the future. Hopefully I will. Hopefully the hobby will return to its golden age more so than it has. But for now, it was time to push the pause button on trying to figure D&D out and instead start trying to figure D&D Next out. I was making myself unhappy with the game and with my gaming. Moreover my players were starting to pick up on it. This is not a new phenomena. It happened with 2e; with 3.5 & PF and then with 4e. Now it was happening with Next. I had never really given myself over to any of the new editions. I sort of played with the appearance of their rules, but underneath it was some sort of old school melange of what I recalled and ruled on the fly. I have now decided to really play 5e. Play it as if this was the game I was playing and not just the book sitting on the table.

But that doesn't help me much with this blog. Is the uncharted space into which I now sail my RPG starship (hence the new design graphic) best served by this blog, or a redesign of this blog, or a new venue entirely? I have a Facebook page I use for my local gaming group and could focus my efforts solely on that outlet. But, truthfully, I have sort of grown cold on the Facebook bug. I've limited my interaction there to one or two visits a month now and pared down my contacts to only a hundred or so and those are mostly family. I could create a new 5e focused blog, a new blog for my gaming interests generally, or a different vehicle altogether. To tell you the truth I'm a little confused as to what to do. I've even considered dropping the gaming blog and focusing on one of my other interests.

All this to say, who knows what comes next. I would say stay tuned, but then nothing may be on this channel for some time so ...
at February 23, 2018 2 comments: