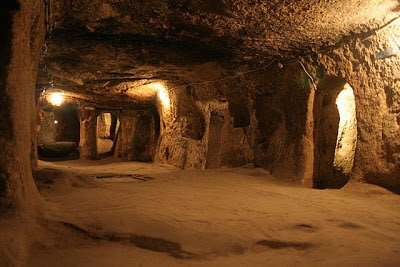 Evocative, huh? Place torches where these electric lights are, some dungeon debris on the ground and a pair of glowing eyes far back in the hall and you've got an awesome adventure space.

This is Cappadocia, ﻿a location of vast underground cities, known predominantly for offering hiding places for Christians fleeing persecution. Cappadocia is located in what is modern Turkey: 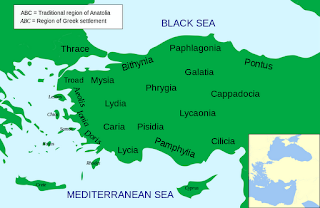 According to Wikipedia these underground cities "have vast defence networks of traps throughout their many levels. These traps are very creative, including such devices as large round stones to block doors and holes in the ceiling through which the defenders may drop spears. These defense systems were mainly used against the Romans. The tunnel system also was made to have thin corridors for the Roman fighting strategy was to move in groups which was not possible to do in the thin corridors making it easy to pick them off." I can just see a bunch of gobbers causing an adventuring troupe hell in exactly such situations. 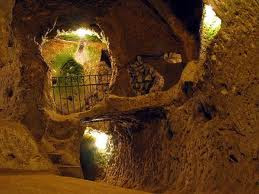 The whole area is a marvel of geological wonders, and an incredibly amazing source of inspiration for an adventuring area.

The entrances to the cities varied, but here are some examples: 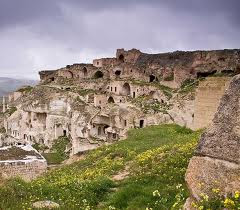 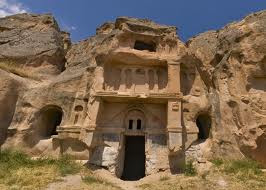 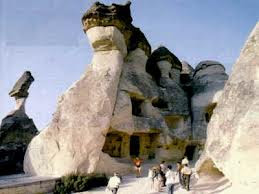 There is much more online about this incredible site and its rich history, all which lend to endless creative inspiration. And it's just kind of cool to think how awesome our own world is once in a while : ) Churches were common in the Cappadocian underground cities, and here is just one example. Change the iconography and it's ripe for evil cultists ... 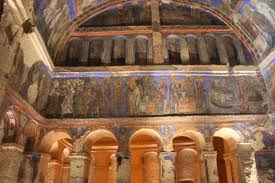 The sheer scope and size of the place boggles the imagination. I mean we are used to mega-dungeons, but I often find myself scaling back my inspirations when designing dungeons as somehow too over the top, or unbelievable. But Cappadocia literally tells you that anything is possible architecturally given the right stone to work with ... 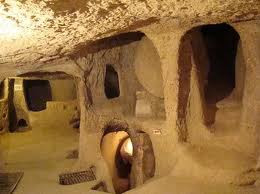 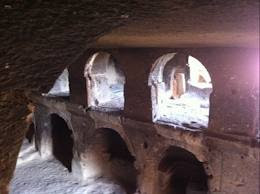 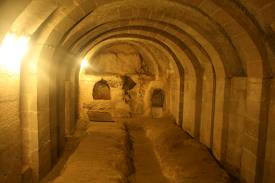 ﻿This last piece intrigues me as I have no idea what the channels in the floor are for--water transport? sewage? blood from sacrifices? What do you think?

Assassin's Creed evidently has a setting for Cappadocia in its game, and I find these while searching for images to the palce. I'll end with these to bring the place to life as an artist imagined it ... 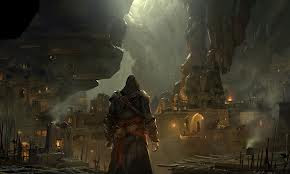 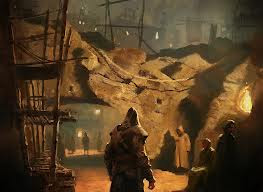 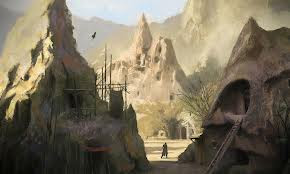 Have fun in your fantasy version ﻿of Cappadocia!
at December 06, 2012 1 comment:

My daughter showed me this ... apple doesn't fall far from the tree does it : )

I mean do you remember when you did?! I can't recall the first one I did, but boy did I write them. Hours spent creating dungeons while I should have been paying attention to my Algebra teacher. Page after page of graph paper, simple room descriptions or innovative (at least I thought so at the time) traps and monster strategies. New magic items, penciled drawing now fading with age, but bright with imaginal memory. Yeah, you know what I'm talking about. Well, I was kicking around Kickstarter -- pun fully intended -- the other day and found this little gem: 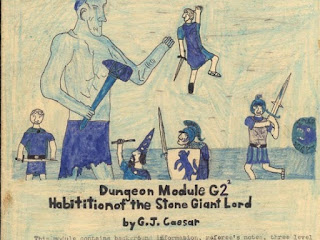 The Habitation of the Stone Giant & Other Adventures

This amazing little work is a product of the brain of artist and gamer Tim Hutchings. He evidently asked for submissions from gamers the world over of their gaming products. He has some samples on his website, in the Play Generated Map and Document Archive. And talk about a walk down memory lane. Though I must admit, some of these guys were a lot more organized than I ever was. And better mapmakers than I was at 12 ; - )

By the sites own words the purpose of the project is to "is to preserve, present, and interpret play generated cultural artifacts, namely manuscripts and drawings created to communicate a shared imaginative space." Which, as a trained cultural anthropologist I find fascinating. As a gamer I think it's freakin beans awesome!! Anywho take a look around at his work. I haven't emailed him or anything to see if the product is still available, but I would love to have a copy.

And one more gem before we depart for today that, had it been on sale I would have snapped up in a wink. In fact it looks as good as many Judges Guild products did back in the day ... 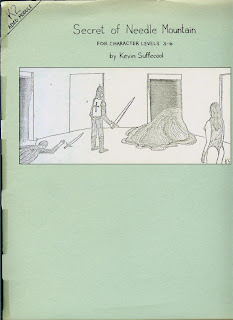 Old School: Back When Elf Was A Class 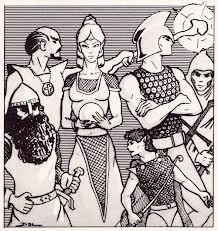 Some time ago I ran across a blog post on demi-human racial level limits   and it intrigued me so much I started a thread on Dragonsfoot about it. Level limits are a hot topic in old school D&D because it's one of those areas where players that often seek to be purists about cleaving to the "old ways" often diverge from the way things were. In other words they always have a justification about trashing level limits. And of course new school gamers, unhindered by or ignorant of the past rarely consider such rules good or rational. The fact is they were quite rational as Thoth's article clearly points out.

The reason I bring it up now is that I too find myself considering the race as class limitations in light of the rule innovations in the Adventurer Conqueror King System. It's actually a novel approach to keeping the unique quality of the demi-human races while not "restricting them" as much as creating them as a separate class--no pun intended. For they do indeed have classes all their own, that humans are not allowed access to. A cool approach, and though I don't feel the need to justify the rule concept, find answers quite nicely the objections of detractors.
at December 03, 2012 No comments:

Right off I like the reference to the value of wealth in the game. This is of course a default. A judge could decide that his wealth system works differently--but I like this as a baseline assumption. This was never quite explicitly stated early on in D&D/AD&D--which led to some problems in wealth disparity, or at the least a loss of verisimilitude. Pay a serf with a gold piece and he can live for a month. n when you need every bit of your 250 GP to sustain your livelihood you're a lot less likely to upset the balance of wealth in the world. This is an element of realism I'm fond of as a baseline anyway.

This realism extends to a good discussion of the market and market classes in the game, which of course affects equipment availability. And a few words about commissioning equipment--something I've found almost all players want to do at one time or another, There is also the admonition to keep close track of your wealth, as that is one of your primary reasons for adventuring in the first place. Gary was quite fond of pointing out that economics could move adventurers, games and campaigns to a large degree. Even suggesting using up player's resources quickly to let them know they had to keep heading out to get more. This is another old school principle nicely built into the game ethos in ACKS.

There is a rather thorough collection of equipment with accompanying descriptions. I like the inclusion of herbs as well. I see here a slight call back to AD&D and it's excellent equipment lists. I've only seen another I really like in a core game with LotFP.

Encumbrance is uniquely and realistically counted in stone, which weighs about 10 pounds each. And most characters can move unencumbered carrying up to 5 stone (or approximately 50 lbs). The rules seem workable, but it will take some play to really know. There are easy conversions to coins, and information for travel by beast and vehicles of burden.

Then, and I am very impressed with, the information on hirelings, henchmen, specialists and the like. There are reaction tables, loyalty factors, cost, and availablity; much of it listed by market class. I say I am impressed largely because like some other games I truly like (Hackmaster AD&D and LotFP) they devote significant time and development to this aspect of the game. This is such a rich area for roleplay, storyweaving and interaction that has been largely dropped from most fantasy roleplaying games these days that I am always pleased to see these sections added in and attended to with detail and care. There is even a table for spell availability by market class, something I wished I would have had literally dozens of times.

Yeah, you can sense my hesitation. This is the chapter I have doubts about. I know proficiencies were a part of late AD&D, an expanded part of 2e and were included as part of BECMI / RC play as well. And I used them in my early play. But I came to dislike them. In fact I stopped using them later because they just seemed to get in the way of what classes were all about. I know, it's a finicky attitude--but it's a part of my grognardly ways. But then I began to understand that they were simply a way of fine tuning a class to be unique without adding another class to the game. However, that was seldom how they were used, but rather as adjuncts to character power. My feelings stayed mixed for some time now.

I mention this because I am literally reading this as I write. I'll read a section and then my write my reactions. You are getting this very much in real time. So, I am now going to read the proficiency section and we'll just see if I can be convinced otherwise.

Okay it looks like characters get the Adventuring proficiency at first level, one class and one general as well as bonuses for high intelligence. So characters can start with up to 6 and at highest level some classes can have up to 13 proficiencies, if they don't take one more than twice. They work as bonuses to performing a proficiency throw for that proficiency. Some can, as I've implied, be taken more than once like Weapon Focus, but don't stack, rather they add weapon classes.

This is a good time to bring up languages as well, which work in fairly standard fashion. Everybody gets common, Int of 8 or higher seems to imply literacy. Demi-humans know a few more languages and bonuses for high intelligence can add languages. You can also choose the language proficiency to add languages above and beyond those at first level.

So what do I think about it all? Well, the ACKS proficiency rules seems simple and sufficiently designed. Not alot new here. I like most of the descriptions, and they don't seem unbalanced on first read. My final say will be influence, believe it or not by D&D 5e, and the 2e kit concepts. I personally liked kits, and I like ACKS templates for the same reason. Since I've followed the development of 5e chugging along I've acknowledged the idea that you can go alot further in a class based system by following the design the kind of character you want sort of thing, without creating a whole new class. I can see this is the way ACKS thinks in that they have suggested quick play templates and in their second book the ACKS Companion has more suggested templates.

The total number of proficiencies is just over 100, and though some are slightly "feat-like" most are worded in a way or designed with a degree of roleplaying in mind. The close of this section ends with a kind of nice note about 0 lvl characters' proficiencies and how they advance--a cool addition. In the end I could live with this proficiency system. It is not over the top, too many are not awarded, you can only take a handful multiple times and I like they way they are very close to the original proficiency system. Though Gary disliked that first system himself. Oh well, we can't have it all : )