Second session two days ago. We've broke the groups up into two, and three people didn't show up to the Tuesday session. That means we were down to five, which is pretty darn close to ideal. We all fit at the table anyway. Tonight's group is listed as 10, but I'm hoping a few drop out there too. The first group I'm running (on Tue) is going through: DCC #28 Into the Wilds 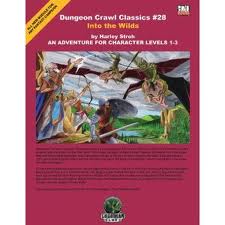 They are having a blast so far. The dire bat riders were quite a challenge but they made it to Wildsgate for some healing and made alliances so they can try to talk with Lady Aborn. Can't wait until they get underway to the caves. 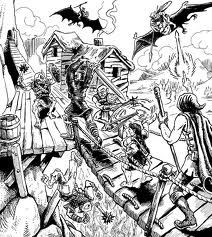 My Thursday group is going through my bastardized refit of Hackmaster's version of B1 Quest for the Unknown, which I mentioned previously. 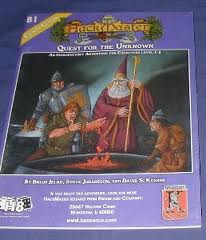 And my troubles with my players being a little concerned about my houserules for PF has waned considerably since I clarified what I had changed and why. We are using a highly modified critcial hit and fumble table. Multiclassing can only be done back in civilization under a new master for the first level; but leveling up is fine during the adventure. I have restricted certain armor and weapons; taking of a prestige class must be roleplayed between adventures. And to start we are only useing core rulebook races and classes. But that will be expanded as we go. And I'm finding out that as I read through the PF stuff and get more familiar with the rules I'm out rules lawyering my rules lawyers!  so, bring it on Baybeee! I got GAME!