So I'm looking for old school sci fi games and this is what I come up with:
Mutant Future: Goblinoid Games remake of the classic Gamma World post apocalyptic genre. 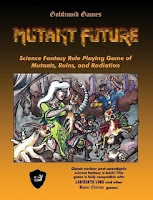 And then Xplorers which is a brainstorm of "What if Gary and Dave had made a Sci Fi game first?" sort of experiment. 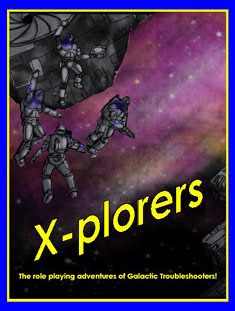 But What about good old Star frontiers? It was produced in 1982 -- way pre 2nd edition. So untainted by all the new fangled "rules" that were tweaked and added in later editions. It seems simple enough. The original books were: Basic 20pp, Advanced 100. That's pretty concise. Stats are a little more complicated and the combat rules more involved. But they had to account for vehicles and hi tech weapons, so that's understandable. No more so than any other OS sci fi game, except perhaps X-Plorers. The few times we played it it sure felt OS. To me the game screams OS, but it is so often left off OS lists. Particularly TARGA, which I am trying to rectify.
So, what's your opinion: Star Frontiers OS or not? 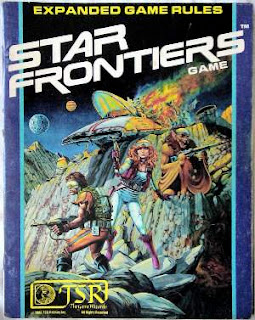 Just what is it about D&D exactly? Part I

“It only surprised me up until around 1977, ... I had thought we were going to have a considerable audience of gamers and science fiction and fantasy fans. I thought easily with those we'd have 50,000 or more [buyers], but when people began to write me [with questions] about what fantasy books to read, and I saw the wide range of both younger and older people who were attracted to the game, I understood that it was reaching a deeper chord, something deep within us.”
-- Gary Gygax

Thus spoke the master many years ago as he contemplated the uncanny success of this new phenomenon: Dungeons & Dragons.

Just what is it about these games we love. What is that chord they are touching deep within us?

Well, I have a theory but some may not like it. Some may find it an inordinately cool theory. Either way the reasons are the same--it transcends gaming and slips into the areas of philosophy, particularly metaphysics and *gasp* spirituality.

Long ago as our early ancestors gathered around campfires after filling our bellies with a hard won evening meal we quieted as the storyteller cleared his throat and began to speak. Weaving stories of the world around us, of deeds and escapades of heroes of the past--so close we could almost touch them, still living in the mists of mythic time. Stories of the creation through which ran the threads of time and being right to you sitting there breathing fast as the tale mounts to a climax.

These early shamanic storytellers walked the line between the worlds, between our world and the past, the future, the possible and the seemingly impossible. Travelling into these other worlds to explore the true nature of reality, encountering heroes, fantastic beings, spirits fairies, monsters and even the gods themselves they won the treasures of great wisdom and plumbed the hidden mysteries of the cosmos. To these early bardic wizards we turned to maintain our connection to something greater, something beyond, to the cosmos itself. All of our actions, our accomplishments or failures and disasters took on cosmic significance. They became more than the simple day to day vagaries of life--they became a part of the mythic tapestry of existence itself.

These stories indeed evolved into the myths and legends of later cultures. They were the foundations upon which were established all the major religions of the world. Religion, those vast forces that stride across the globe and ages of men shaping the history and the destiny of our planet. Out of this developed all the religious beliefs of man. All this out of the stories and wisdom of shamans that crossed the boundaries between the worlds.

Whether people realize it or not the "spiritual" aspect of religion is deeply tied to access to other worlds. When we have religious experiences we touch something that our brain is wired to sense; that somehow deeply affects us and is often transformational in its energy and apparent purpose. At times these come in terms of fleeting inspiration, overwhelming ecstasy, enlightenment or illumination, out of body experiences, visions and the appearance of beings, creatures, monsters and even Gods. Such manifestations of "spiritual" power are often achieved via alternate states of consciousness. At times music, chanting, liturgy, ritual, prayer, guided imagery, devotion, meditation, physical flagellation, fasting, drugs, hypnosis, etc. etc. are used to induce these states.

I would like to focus on one in particular: guided meditation.

This type of inner imaginal experience is common in visionary religions; where one aspirant will in some trance state, having caught the vision of the other world, will describe what he/she sees and others will follow suit; taking up the imaginal torch and "seeing" the same and even new wonders. All those who have taken part in such an experience are often at a loss to explain the manifestations, but are very reluctant to simply discount the vision as imaginary. It has some level of super-reality that they are loathe to release, or discount as actually false. Such techniques are common in the more "magical" traditions of spiritual practice; and at their extremes may involve astral travel, out of body experiences and otherworldly encounters.

I would claim that the collective storytelling that takes place in roleplaying is a variant on this same time honored discipline. I would further claim that the fantasy genre of these games are even more powerful in this sense because they tap into universal mythic archetypes that are already loaded with psychic potential. In fact these powers could in many ways be said to be real. On the other hand when we deal with "science fiction" and other more "modern" genre we are only dealing with universal archetypes as an undercurrent with all new window dressing as it were. But fantasy immediately links one to the otherworlds out of which these forces came in the far and distant past. Still very much alive and very real.

Pre-gamers are like the rest of the world in the sense that we are frequently distanced from mystical firsthand experiences with "the other". Normally the ability to sense such forces stay securely locked away in our subconscious psyche. Gaming unlocks some of these "windows" if not actual "doorways" to such experiences. We often couch the game and its experience in literary, artistic, social or even psychological terms: 'it heightens the imagination, it's an act of collective storytelling, it is an escape to another time and place', etc etc. And all of these would be true in some sense or other. But only one model accounts for the fact that this activity "touches" something within us that is best described as being at a "deeper level."

These archetypes powers and forces are real and they still thirst to work within us for our own benefit--and for theirs as well. I'm not pompous enough to suppose I know exactly how this works, or why it is. It is, though, a self appointed life mission to understand it. if I was ever "called" to do anything this would be it. And as regards whether roleplaying is a form of guided imagery, well I am an accomplished enough occultist to see the obvious similarities between the methods.

Now, just so that those who would take issue with such an idea and its uncomfortable implications I would remind you that _all_ religions started this way. You can argue this point, but your argument will be couched within the tradition from which you hail and likely biased towards that tradition. The facts seem to speak for themselves on the account of the genesis of religion. So to say as pro-gamer that we should not make correlations that might hurt the industry as were done in the early 80's; or as anti-gamer to say that your fears were all along justified, seems to miss the essential point. That something profound is happening here. Something that captures a certain portion of the population like nothing else ever has before in their lives. To wrestle with that implication is I think an amazingly fertile ground for a deeper understanding of ourselves and just what it is we gamers are doing.

What also amazes me and draws me to write this article is a small handful of wargamers came up with this method independent of their contact with other similar influences. The fact that man seems inexorably drawn back to his mystical/spiritual source is to me a marvel and one of the most profound questions we can face in our brief existence here on Earth. and perhaps the most important legacy we can leave to those behind. This divine geas led these young post adolescent bardic wizards back to the source, back to the otherworld and to the guided imaginal experience that is roleplaying. In doing so they reconnected us to something deeper, something more real because it reaches beyond the ordinary and shows us once again that we are a part of the mythic not separate from it.

This is what I think Gygax was talking about when he made the reference to that deeper chord.