I am, in many ways, still creating adventures the way I did back in the day when I was first playing AD&D. After we had run Keep on the Borderland and Isle of Dread into the ground (yes, I know they aren't AD&D adventures, but I had the BX sets with the AD&D books, so ...) and started creating adventures on my own, my notebooks were crammed with graph paper maps, drawings, lists of encounters and campaign notes. I never realized I was keeping my first campaign journals back then, but that's essentially what they were. My daughter recently texted me list of digital campaign management tools when she last saw my scattered ream of loose-leaf sheets that were stuffed into my trusty portfolio, to whit: 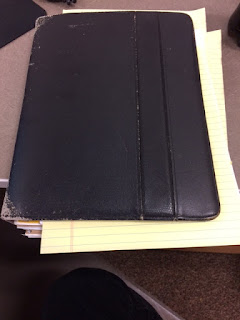 But in my defense, I had just transported all of my ArborDale files into a nice three ring binder. Anywho, with that explanation you can perhaps appreciate my next two pics which show the initial notes for this first leg of the journey. 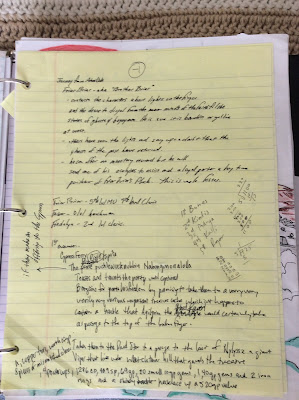 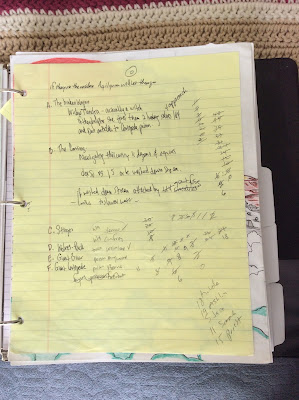 Everyone's DMing style and adventure/campaign writing style is different; and I don't always use the style captured above, as I also have reams of type-written documents detailing other portions of the campaign and region around ArborDale. However, the time and space I have for campaign creation is often limited, and my handy-dandy yellow pad I carry everywhere often ends up being the go-to for notes and ideas when I have a few minutes to write them down. And with my DMing style, less is more as I improvise and create around a mental picture or idea in my head which the notes alone do not often capture.

Sadly, this work is often not captured after the fact. And a set of one or two hand scrawled notes as pictured above do not capture the details and color of an actual session. This can make sharing such work difficult at best. Despite many efforts over the years I have not transformed my better adventures and campaigns from notes, to rough draft to final draft to finished draft, to edited copy to polished publication worthy material. That my friends is still a far off dream.

With that being said allow me now to list the basic adventure outline up to the groups arrival at Broken Finger.

I: Request from Friar Briar
A. Fester as Guide
B. Findalyn as Healer
II: Cypress Ferry
A. Fairy Offerings
B. Nahongunonalolla
C. Path to the Bauble
III. The Lair of Nylyssa
A. The Ward against Agilgrim
IV. The Witch & the Wagon
A. The Remedies
B. The Dead
C. TimeSlip
V. Crossing the EverRun
A. The giant beaver
VI. Blood Donation: The Stirges
VII. The Dark Watchman: Wolf Pack
VIII. The Hunt: The Giant Boar
IX. Cries in the Night: Water Baby
X. Things that Crawl in the Dark: Giant Centipedes
A. Lair of the first attempt
B. A conspiracy is detected aka "Something's rotten in ArborDale"
XI. The Blood Swamp
XII. Approaching Broken Finger

The actual unfolding of the encounters listed above were colorful and successful. But as you may already be able to tell, the notes themselves do not do justice to the actual play sessions. This I will detail next time as a complete narrative. I'll discuss why I think it was successful and begin to foreshadow why I thought the next section, much more thoroughly detailed was not nearly as well run as the first. As we progress through the campaign thus far I'll also explain why I decided to run an actual out of the box module from AD&D and why I was not wholly pleased with it either. Then I'll be prepared to give my overall impressions of why 5e isn't really an "old school" game in the classic sense, but why that's okay and what it might mean for other grognards like myself who are trying to live in the ebst of both worlds--something 5e itself tried to achieve. Lastly, I'll explain how all of this has changed my design trajectory and future plans for the campaign and my D&D play for now.

Some time ago I mentioned the new 5e campaign I'm running, which was designed as sort of me foray into what might be called "old school" 5e. Another time I'll wax philosophical about why 5e really isn't a game to be played "old school", but for now I wanted to follow up on a request to post some of the initial encounters of the adventure, and my attempts to play the game with a "classical" element woven in. So I'll be publishing some of my homemade maps and notes to give you an idea of what I threw together as well as how play went through each phase of the campaign.

First, you may or may not recall, I'm playing with my two older teenage daughter and son, my ten year old daughter and a family friend in his mid twenties. We play each Sunday afternoon for about a three to four hour session at the kitchen table. All players have played before except our family friend, who is now of course hooked for life on D&D, and gaming generally. The campaign started with a fifth player, teenage nephew, but he lives in California, so can only join us When he's visiting. The roster of characters were: 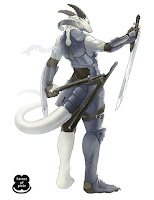 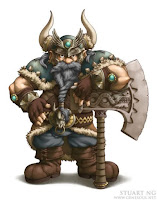 And, Adrya the half elven Sorceress of Copper Dragon bloodline

Before we can get quite underway, we have to step back a bit and frame the campaign against its backdrop. In fact, an understanding of the realms round about is critical to the overarching direction of the campaign as a whole. And the immediate backdrop is the Kingdom of ArborDale.


The Idyllic and romantic gem of the outer provinces is the small but legendary kingdom of ArborDale. The Legends say ArborDale was blessed by the goodwill of the Gods and tended by the Druids, like a garden of solace from the world. The actual city of ArborDale hosts legendary Castle ArborDale and is presided over by the beneficent Fawn King and his beautiful Queen Serienne. The most noteworthy natural feature in ArborDale is the vast and kingly Oakwood roughly divided into the Upper and Lower Oakwood separated by the wide blue EverRun River. The Amber Wood embraces the kingdom’s eastern borders, filled with the beautiful amber trees, their golden green leaves making the large wood glisten like a jewel of Amber. The Amberwood is said to be the home of the Golden Dragon Hedrimyr in legend, and is tended by his followers, the golden skin Dawn Elves though none of seen such a creature, let alone the legendary wyrm itself.

To the south lie the cooler and wet lands of The Bogs. A vast swampy area, more like a sprawling shallow lake filled with ancient Cypress trees. These massive trees fill the northern portion of the area and the give the name Featherwood to that region, a token to the feathery like needles of those giant trees. Further south yet, the Feather Wood gives way to the WetWood, aptly named for its almost constant presence of dark green waters that carpet the forest floor. Drapery Moss hangs heavy throughout the forest here and though the sight is one of striking if strange beauty, weird and fell creatures are said to make their homes here. The Cat River and its thousand tributaries feed this huge area and is home to the legendary giant CatFish that some brave fisherman hunt for a living.

In the heart of the Dale hidden within these forested regions as if by an arbor lies the city of ArborDale. More like a large town, ArborDale boasts almost 20,000 citizens if the surrounding farms and landholdings are included in the population count. Mostly forest folk, lumbermen, foresters, farmers, hunters, and fishermen the Dale is a rich and bountiful area. Though over 90% human some  2,000 or so demi-humans make their homes here as well. The majority are halflings that live in the rolling plains to the northeast of ArborDale along the HighRoad Shires.
Now, what the characters don't know alot about is the more ancient history of the times before ArborDale. Most of the citizens of the Kingdom of Arbor Dale doesn't know the long ago histories as anything more than fairy tale legends, more distant than the fanciful tales of Herimyr the Golden Dragon of the East, or the Silver-Maned Unicorn said to be protector of the great Western OakWood. The Kingdom of ArborDale is one of the western-most kingdoms of what are commonly called The Outlands.

The Outland Kingdoms are what remains from the frontier of a great Empire that defined the height of human civilization long ago. The Empire long ago fell apart and several kingdoms arose in its stead. The Empire had established a peace and prosperity that had not existed previously in these once wild regions at the borders of civilization and so these lands now had enough stability and peace to arise and establish themselves in the wake of the waning Empire. The originally benign Emperor had established an extensive chivalric court, an extensive network of monasteries that in turn established a collegiate system for the education of the masses and generally raised the literacy and wealth of the common folk as well as allow for the development of a thriving middle class.

Upon this structure and order rose the basis of many subsequent kingdoms, the focus on our campaign being the Outland Kingdoms and specifically ArborDale. Most of the above ancient history (circa 500 years before present) is remembered as the Golden Age, and the Empire as the Golden Empire or at times the Eastern Empire. It is thought to be a time of great political, philosophical, religious and magical wonders and advancement. Most of what is good, noble and worthy of trying to achieve again is, in the Outland Kingdoms, generally seen reflected in the long ago history of the Golden Age of Empire. It was a time seen when the Gods routinely talked to their priests and priestesses directly guiding the path of the world's history; a time when the ArchMages walked the earth, immortal, cosmically powerful and almost Gods themselves. The truth of the matter is lost to the knowledge of men, and the little sage historians know seems to tell a far stranger tale.

But these tales live far in the past. As does the dim, dark memory of a sinister figure called The Skull King, Prophet of Death. History has done much to obscure the tale, but the Skull King is rumored to have been a rebel prince who broke from the Empire, pursuing dark magics to attempt to kill the Emporer and overthrow the Empire. His evil was seen to be so great and deep that he did not desire to simply take over the Empire, but abolish it utterly. The legends speak of a Champion of the Emperor, some say the Emperor himself, who faced and defeated the Necromancer, chasing him deep into the belly of the World and through it to other worlds and dimensions of Time. The myths, for they are seen as such by many, and some say the Skull King was a long ago fallen God of Evil conquered by the Golden Light of the Empire, and a metaphor for men to conquer the evil in themselves in order to bring about the Golden Age again.

Just how these ancient tales fit into our day and the current Campaign of ArborDale remains a mystery to our characters and most within the current story-arch. As are lands beyond ArborDale, which I continue to detail, but do not pertain directly to the current campaign.
To keep these entries manageable, I'll detail the encounter areas and adventure hook along with initial NPCs next time. This first part of the adventure went quite well, something I can't say for the second leg.
at November 20, 2016 No comments: