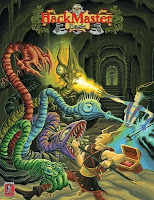 What can you say? Any RPG that can manage to lasso Erol into doing their cover is tops. No disappointments here at all. In typical EO style he grabs your attention with the unearthly wonder of the beast he depicts here. Even better this is a Hackmaster Basic specialty: The Aquatic Worm Hydra. A snaky body with twelve mushy, drastically distinct heads, each of a differing color to bedazzle and astound while they spew forth differing and shatteringly powerful attacks at any adventurer foolish enough to venture into its lair.

On the right our two brave adventurers, one a spell slinging mage, and the other obviously a warrior of some ilk manages a spear thrust in the maw of one beast, brown hued ichor splattering his banded mail. What could possibly have aroused the beasts suspicion probably has to do with the open treasure chest at our adventurers feet. An intriguing and mysterious red mask, slightly aquatic in appearance itself lies waiting within. The sandy and semi liquid floor beneath their feet make me believe the lair is located somewhere terraqeuos; though what causes a true shiver my spine and a thrill through my sword arm is the menacing figure in the archway in the far background. Cthulhoid architecture frames his fungal shaped head, his long thin tentacle-like arms bespeak some unknown horror I dare imagine.

Yes, we are talking classic Otus here and he is in rare form. What better imaginal expression to set the tone for the best game known to man that this hideous masterpiece of wonder? I am impressed indeed Kenzerco D-Team. I can only imagine the design meeting when this idea was put forth ...

"We should get Erol Otus to do the Cover!"

Silence, and then slowly the awesomeness of the idea dawns on each of the K-crews faces. And then a collective "Yeah! Kewl!!!"
"Hoody Hoo!!!!"

Success they say is all in the execution. Consider this an execution par excellence!

So I'm pondering, and meditating upon the situation last night on the drive home. I wrote yesterday that it seemed like the only option was to buy AD&D 1e PHBs for all my players and the club and just charge ahead with 1e. I mean if nothing else really works for me, then why not. It's gotta be 1e right?

Well, does nothing else really work? Could it be said that I really gave everything a try? Of course not. I've hovered around the issue and pecked at it, occasionally making gentle forays into other editions and systems, but nothing really held the old magic. And the idea of buying a bunch of old, used PHBs left me cold.

I was talking to a friend last night and was surprised to heard myself again repeat what I had said on the discussion on the K&K forum just yesterday afternoon. That the real magic of the TRS age, was really that we were a part of something bigger than ourselves. TSR was THE company. No one else really held sway over fantasy gaming like it did. So we were all a part of something big and collective and grand. Even though we were "in" on less than 10% of it, we were a PART of it. Now, to be a part of gaming is like being a part of this big, confused, watery, diluted, mess of a hobby. You say you're into gaming and people don't even know what you mean anymore. Computer gaming, gambling, 4e, or what? There's so much out there as to have become meaningless as a whole.

So, the answer to such a question seemed to be to recreate the magic by begging WoTC to reissue 1e. To rebuild Camelot. To raise King Arthur. ... Or was there another option?

I got home and looked at my gamign library. Pulled out Hackmaster and Frandor's Keep. And I sat down to read. First of, course, one reads the intro by the Kenzerco D-Team. As I re-read their words, it seemed like they were long lost friends talking to my aching gaming heart. "... a game like _we_ would want to play." And then I read Gary Jackson's magical and thrilling words on the next page. Was the call to adventure pounding in my ears again? I continued to read, and I read and read and read. When I set it down, I was speechless, stunned by the realization -- the answer is right here. It was right here all along. Later that night I logged on to the Kenzerco boards again and began reading up on old posts.

The thing about KenzerCo is that they aren't just seeking to reproduce a game. They are recreating, or better said preserving, an experience--a spirit. And that spirit is captured in not only their new game, but in their community. It may very well be the community I was looking for. Through the mists of Avalon a vision was forming. Tall spires bedecked in gleaming silver, and as I drew closer the ancient inscriptions above the door were clear: KenzerCo.
at January 13, 2011 No comments:

Suffice it to say my "little project" isn't going as well as I had planned. I got alot done over the weekend, but then I stalled. And the stall dealt with two main things.

Yeah, they're pretty big issues. I geuss to put it in a nutshell I'm wondering why I'm trying to cover the same ground covered better by those before me--Stuart Marshall et al. And as I tried to explain myself I waxed quite nostalgic about the old days, Gary Gygax, TSR and the like. I miss it and I want it back. So I stay old school, keep playing with my old books and continue to struggle with the feeling that I am a lone soldier waging a losing battle in trying to preserve a past doomed to fade away.

Can it be recaptured? If I want to play 1e I have to play with out of print books made by a defunct company, by a man who now rests in peace. Why do I feel like this is an unsatisfatory state of affairs? And more importantly, what do I do about it?

The Knights of the Dinner Table still have it, why can't I?

Thing is, as I read the last KODT issues I had the sneaking suspicion that they were changing slightly to market their new version o the game, not preserve the old flame. They feel their version does that--and I can't quite get on board with it.