A Cornucopia of AD&D Goodness

It was my intent some weeks ago to go page by page through the AD&D books and comment on them as I go. Well, two things threw me off track. One was a real world matter--job promotion, lots of stuff going on there; the other was my growing commentary on almost each and every sentence of the DMG. I mean I hadn't gotten much past the table of contents and I was already stacking up my own pages of commentary. Exactly how was I ever to finish this if my thoughts ran on ad infinitum in response to each phrase Gary wrote down?

Well, the project deserves continuance, so I'm picking up the threads here. I'm not sure I'm gonna go about this like I have been or not. I don't know if brevity or expansiveness is best. So here I take a step back. I'll quote each area that struck me, and try and give a sentence or two of my thoughts in relation to these quotes from the original works. See, the real problem is that the words of the AD&D canon have so much to say, directly and implied to the current modern gaming world that we really should all go back and read the works for ourselves. I suppose I'm coming at it from the perspective of a lover of these works, and an avid aficionado of the AD&D game. Others, not so partial might not find the depth I inevitably uncover, but ah well--not everyone appreciates the Classics.

So without further ado, I present thoughts from the Table of Contents and the Preface to the Dungeon Masters Guide. 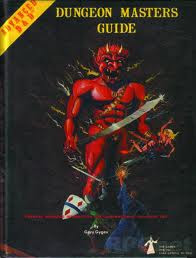 Table of Contents
Preface
Rest assured that Gary did not develop AD&D in isolation. It was his ultimate expression of the game. But as mentioned earlier he had faced all of the common problems known to gamers today. Alternate methods had been theorized, playtested, rule changes experimented with, different ways of doing things attempted. Gary knew what worked and what didn't work in order to achieve the Spirit of what AD&D is. Notice that Gary didn't say or imply that AD&D was different for whoever plays the game. Clearly there is AD&D and NOT AD&D. The rules he included by and large encompass that. This is something Gary returns to again and again in his work Roleplaying Mastery; that there is Spirit unique to AD&D and changes to the system must be undertaken carefully or else you will be playing something that is not AD&D.

It is within his preface, written once his trifecta was finally complete, that he urges us to read and play and discover the Spirit that is AD&D. My question for you is: Have you found it or have you lost it?
at July 07, 2012 5 comments:

I've written about this before, but I was reading an interview with Monte Cook that not only brought it to mind again but also confirmed some of my worst suspicions about editions of D&D under WoTC. The article was lamenting the early and in their opinion unnecessary release of 3.5.

What Monte says is that 3.5 was released way too early. He says 3.5 was scheduled to be released in 2005. And that is when it hit me. 2005?! That was only 5 years after D&D 3e! And they were already planning on releasing a new edition. The interview also says that the basic model follows a thought that once they release all of the core books and available splat books, it's time for a new edition. They didn't follow this model with 3e and they assume, it is because they didn't want to revise everything in the planned 3.5 release.

Now I know that some of this interview can be ascribed to bitterness on the part of Monte, that his edition wasn't given a fair shake. That the new edition was released too soon. But even so the official plans were a max run of 5 years! Which means right from the start there was a five year business model for producing D&D editions.

So check it out:

Yeah, you know I really don't care what they are saying about this will be the edition to unite all editions either. When asked directly if this would spell an end to edition making Mike Mearls really refused to answer directly. 6e will be out by 2018. You can bet money on it. And if you are gonna play D&D you will be paying that money directly to WoTC.

You may ask why I'm choosing to bring this up. I mean I've written similar rants before and this is pretty much common knowledge. Well, let me tell you. 5e is just a little bit alluring to me. It looks, well, somewhat interesting. And I'm just gullible enough to buy some of the rhetoric involved in this new edition. But even if it is a decent new game, and it will be a new game regardless of the rhetoric, I don't relish the idea of buying into a game that is only planning on being supported for a max of five years. Sorry Wizards of the Coast, that business model just lost me.
at July 07, 2012 5 comments: