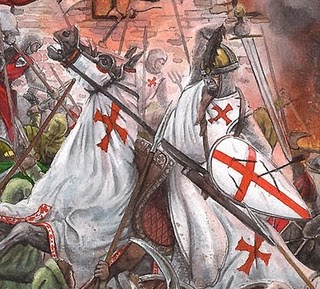 Everytime I make absolute statements I find myself equivocating in my very next post. But our Pathfinder games are going pretty well right now. I am trying to be okay with the game for right now. Whether or not I seem able to buy the PF books for myself or not. Group one managed to finish the Pathcore adventure with panache and flare. They were literally chest-bumping each other in celebration. I was really happy for them--they deserved the win, as they had been gaming quite well. Group two is making headway into the Barrow, and are about half way through. I will be combining the two groups next week, and we'll be back to two sessions a week with the same combined group. Sadly the group has dwindled some, so we're down to about 8 to 10 at most sessions. But that may be for the best.

Looking back over this year's club I still really don't know what caused us so much trouble. Group size, clashing personalities, lots more insulting remarks than I've ever dealt with before at our club, and poor playing. I probably should have expelled a few kids from the group--but I just can't bring myself to do that. I always talk with them about it and give them another chance. Funny thing is though some of the troublemakers simply aren't coming anymore. They started missing a few sessions here and there, and then finally quit. Nice sort of, but bittersweet as we lost some good players who were sick of dealing with the crap of a few gaming turds and left earlier.

Something I've learned about myself is that I don't like large groups. Seems like a simple enough realization, but it goes deeper than just that. I also have to "click" with the guys I game with. I suppose they have to "click" with me as well, as there have been a few who simply don't like the way I do things. But finding that out takes time. Here we are three fourths of the way through the school year, and just now I've got a good group (group 1) of players that I really like gaming with. I like the way they think, the way they do things, even the jokes they make. And they read me and my style well. But I can't lay claim to any sort of victory in this. I mean it wasn't anything I did. It just sort of happened. All of a sudden it was down to just us, and things really started "clicking". I will say this--everyone treats each other really well--and that helps more than a little. It may even be at the heart of the matter.

In fact some of the boys who dropped out, or are in the process of doing so picked on another boy, and eventually threw his notebook in the toilet during school-lunch time. A couple were suspended, and there were lingering hard feelings. I called one of them out when he started getting on the boy again; threatening to kick him out he if continued. I haven't done that in years. The boy I called out ended up staying and agreeing to abide by the club rules of courtesy. But he held it against me, and has now stopped coming.

You know, I make all these assumptions about games and systems and the like, but in reality it has a lot more to do with who you are gaming with than what you are gaming. My brother is a perfect example. He lives about 1100 miles away right now in aother state and has been running a 4e game. He really didn't want to do 4e, but he gave in, as that is what everybody else wanted to game. And this month was his birthday and so one family that he games with surprised him with a d20 cake and a Dungeonmaster T-shirt: 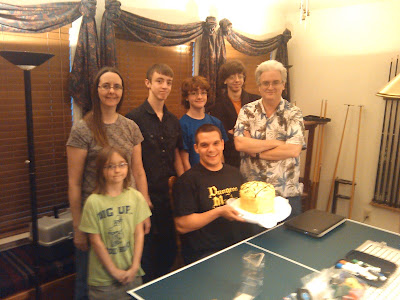 Those are the kind of gaming friends a guy wants. A close group that cares about you more than just the guy behind the screen. They aren't just guys you game with, they are gaming friends.

And in truth, that's the crusade we are all set upon. I have spent countless hours dedicated to expanding gaming in our small community out here in the desert mountains of my home. I have put up with a lot of crap. I have championed the old school, supported the new and tried to strike a happy medium. I have kept up with my blog, participated in email groups and fora and in my own way keep the flame alive. But when it comes right down to it, it isn't the battles we fight, or the wars we wage in behalf of  the cause we support. It is the home fire hearth, the gaming table surrounded by good friends and blessed with good memories that last forever. This game is about so much more than exploring dank dungeons and fighting bloodthirsty goblins. It's about friends and good times, the hearts and dreams, and the lives of those we love.

Thanks for that Gary. 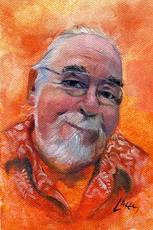