Let's face it, the 5e characters in my game right now kick some serious ogre butt.

I mean in our last encounter through a series of unfortunate events our players, of which there are six eighth level and one seventh level, kicked the collective butts of two beefed up Trolls, four Ogres with very sizable HP allotments, 7 gnolls, a gnoll pack lord and a Fang of Yeenoghu and 8 hobgoblins, a hobgoblin captain and a hobgoblin warlord all in the midst of a a fireball induced fire hazard. According to Kobold fight club this is a deadly encounter that exceeds the exp recommendations for deadly by 19,150 experience points (this is for adjusted experience). I'll admit, the bard did fall in combat with the hobgoblins, and was hit while at zero for an automatic crit and two failed death saves, but was quickly revivified by the cleric. They spent most of their spell slots and did come into the battle at full HP and spell slots.

All of this goes to reinforce the fact that, in my opinion, the combat building mechanism for 5e is broken. I have seen different approaches which all pretty much break down into various approaches on tweaking character levels vs challenge ratings. I am going to suggest something similar in this post, but much simpler.

So, for my group I should plan encounters for 6 CR 8 level critters and 1 CR level 7 critter. In other words, My group might fight 6 Hezrou 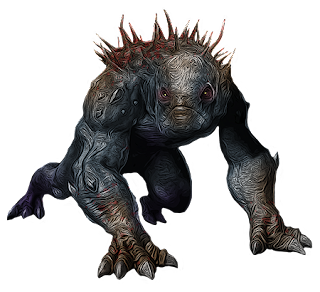 And a Drow Mage 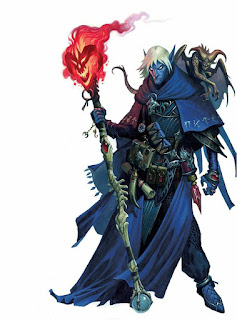 Which Kobold Fight Club says is 38,300 experience points beyond the threshold for deadly--exactly double the encounter they actually fought in the last session.

Too much? Well, let me opine for a moment. Ever since 4e (and to some extent 3.5 had already made the shift, but less so than 4e), D&D became about combat. The game was designed to highlight the tactical and strategic game of outplaying your opponents on the field of battle. To a certain extent this was neat and indeed could be said to hark back to D&D's wargame roots. And arguably D&D has always been about combat, as the majority of the "rules" in the game have been designed around resolving, enhancing and expanding the combat component of the game.

However, I would be quick to add, and argue vehemently for my point, that D&D has always been about more than combat. Yes, combat has always been a critical and exciting part of the game--irreplaceable even. I mean, come on, there is something to be said for combat in a game that at its heart is about killing things and taking their stuff. But even in that statement we see a whole other part of the game--taking their stuff--which has been left behind or at least overlooked in the modern game. experience isn't really awarded for treasure in modern games so there's that.

But it isn't just that, its that D&D is about amazing, wonderful, and weird encounters and interactions. It loses the amazing if all we are doing is substituting a different skin for the foe and slugging it out. Combat should be deadly and players cautious about taking that route. When you do this is shifts the focus of the game. I think the CR build of 5e is partially at least designed around making characters more able to have lots of combats and enjoy that part of the game. Cool. But what if we enjoy or at least want to experience more of the other part of the game?

I have seen other tweakers (bad name for gamers who like to play with the rules) suggest alternate experience models, like treasure only when PCs spend gold won on adventures, others who suggest models based on the three pillars and giving experience for each one in greater or lesser degrees. Heck even WoTC via the Unearthed Arcana column put out an optional rules suggestion to this effect. Those in this last camp have begun to argue that even though the game is supposed to be based on the three pillars of Combat, Exploration and Roleplay/Social Interaction the game itself does not support such an approach as there are only mechanics for combat. Heaven help us if the official game writes mechanics beyond what are already there to adjudicate those, but that's for another post.

But me? I think I am going to go simple. 1 CR per PC level as a sort of default for encounters. Gonna be tough, and its gonna be fun. I expect more creative thinking, more exploration, and more social interaction as a result. I'll let you know how it goes.