Defining the Set of All Possible D&D Worlds

Caveat lector: I am not an expert in philosophical logic, nor set theory, though I've taken classes in both subjects. So don't take my use of these clearly technical terms too strictly.

Several times in the Dungeons & Dragons canon the concept of other worlds are mentioned as a part of the expansive vision that is D&D. In fact the first time it sees actual men is in the 3rd little brown book, The Underworld and Wilderness Adventures:

"OTHER WORLDS:
There should be no "natural laws" which are certain. Space could be passable because it is filled with breathable air. On the other hand the stars could be tiny lights only a few hundred miles away. Some areas of land could be gates into other worlds, dimensions, times, or whatever. Mars is given in these rules, but some other fantastic world or setting could be equally as possible. This function is up to the referee, and what he wishes to do with it is necessarily limited by his other campaign work. However, this factor can be gradually added, so that no sudden burden will be placed upon the referee." (p. 24)

And of course, Gary Gygax had already created the wargame rules for Burroughs' world Barsoom. 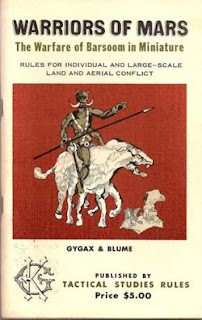 So even before D&D hit the shelves the idea of having fantastic adventures on other worlds was forming as a foundational aspect of the game. Of course this makes sense, as by the time Gary was creating D&D with those around him, speculative fiction of all types were based on this idea of strange and fantastic worlds of adventure. Exactly how this fit into D&D would become more clear as the rules developed.

"This writer always looks forward with great anticipation to an adventure in the "BLACKMOOR" campaign, for despite the fact that I co-authored the original work with Dave, and have spent  hundreds of hours creating and playing DUNGEONS & DRAGONS, it is always a fresh challenge to enter his "world". I can not recommend him more highly than simply saying that I would rather play in his campaign than any other — that other dungeonmasters who emulate Dave Arneson will indeed improve their games." (intro)

So we see that there is a growing idea that different campaigns are seen as different worlds. And later in Temple of the Frog we read of the usurper High Priest, that "This fellow is not from the world of Blackmoor at all, but rather he is an intelligent humanoid from another world/dimension." Thus we see the admission that these D&D worlds were connected to each other in some way and travel between them was possible. Again the game was based on fantastic fiction in which such things were a given. In fact that this genre had opened up the possibility of an infinite number of such worlds -- the imagination was literally the limit i.e. there are no limits!

And by the time we get to Eldritch Wizardry, we see the development of astral travel, dimension door, dimension walking and probability travel. Other worlds are literally opening up before our very eyes, as well as how to access them. The beautiful thing here is how the game is being woven to encompass all such possible worlds. And by the time of Gods, Demigods & Heroes we are encompassing the worlds of the Gods as well.

This expansive vision of an infinite possibility of worlds was eagerly grasped by early players. So much so that it began to create some concern among the game's creators. Regardless of their injunction to take the game to the limits, literally "imagine the hell out of it!" They saw the need to begin to reign in the extremes some players were going to. Admittedly the ones most frequently written about were Monty Hall type campaigns, super high level campaigns and so called god-killing campaigns. These and other hyperimaginative worlds were likely what Gygax had in mind when he cautioned against taking the rules so far as to create something "so strange as to not be AD&D."

I've written before on the "reigning in" quality of 1e, and the many reasons Gygax may have felt for doing so. But the one I am interested in today is the defining the set of all possible D&D worlds.

The term "the set of all possible worlds" is used in formal logic to define the terms of truth in modal, or propositional logic. So, for instance, if I make an assertion such as "the sky is always blue", the extent to which this statement is true depends on certain conditions. For instance the sky is blue during the day. And, on the moon the sky is not blue. The condition sets under which the statement is true is often called a "world". And this idea, that there are sets of worlds can be used to extend truth claims, For instance the set of all possible worlds is all the worlds that could ever be said to exist.

That's about as far as we need to go with the idea. But if you didn't find that helpful, lets just think of all the possible fantasy worlds that could be imagined under the basics of D&D concepts. We don't need to think far to come up with some ready examples -- Metamorphosis Alpha, Gamma World, Boot Hill, Top Secret, Gangbusters, Hyperborea of Astonishing Swordsmen and Sorcerers of Hyperborea, McKinney's Carcosa, the world of Dungeon Crawl Classic RPG, Yoon Suin, The Slumbering Ursine Dunes, Fever Dreaming Marlinko, Veins of the Earth, The Misty Isles of Eld, Vornheim, The Midderlands, The Gardens of Ynn, A Thousand Thousand Suns, Woodfall and countless others that have followed this tradition.

But then consider, the types of campaign worlds available for AD&D. The official products: Greyhawk, Forgotten Realms, Al Qadim, Kara Tur, Maztica, Dark Sun, Dragonlance, Lankhmar, Ravenloft, SpellJammer, and Planescape. With the exception of perhaps the last three, all of these are largely medieval type fantasy games with the variation being in flavor and culture more than mechanic influencing content. AD&D in the middle east, in east Asia, in space, in horror, in a dying world, etc etc. The difference between the worlds of AD&D and the worlds mentioned in the previous paragraph are that the game changes very little from setting to setting. This was of course, by design. The DMG clearly stated that DMs should stay within the bounds the First Edition set as being legitimately AD&D. Thus the set of all possible AD&D worlds became noticeably smaller than the set of all D&D worlds.

The marvelous thing is that as AD&D was released, the outcry of those who feared losing the raw, imaginative freedom of the original game, brought about a preservation of the original power in the basic line. First with Holmes, then with Moldvay Cook. Despite the fact that the B/X line became more and more staid and stable through TSR releases, eventually reaching a level of depth and complexity through the BECMI and Rules Cyclopedia that it was in the end as tightly restricted as AD&D. But the premise of the basic game, that original genie in a bottle could be turned to in a way that AD&D was not quite meant to.

And this was fine. AD&D was meant to be one thing and B/X another. B/X was a toolbox begging to be houseruled and changed and invented in your own image. Hence the basic chassis of the game was what gave birth to most of TSR's other RPGs. It is a little harder to take such liberties with AD&D. Sure, a DM can choose to ignore a few detailed rules or implement a few options from the menu. But In almost all games the classes were the same, magic worked the same and so did combat. Not so easy to assume this was the case with a game grown from the original roots. This was the very reason quoted in Dragon magazine: that the game needed formalized so that other players and DMs could get together and play under a system that was agreed upon. That system was AD&D.

Now, truthfully, as mentioned above, D&D also became a fairly tame beast as the company evolved. So much so it was generally dropped and the game became one thing in the late 90's until the buyout. What we have seen in the OSR is that people have been incredibly inspired by the raw power of the original game. In fact do yourself a favor and head on over to DriveThruRPG and set the filters to D&D OGL, 1e, Setting Guides. Yep. I didn't find any. Reset it to Basic/Classic and there's a literal deluge. The supports being produced for 1e are very much like what was produced in the old days. This doesn't mean they can't get gonzo wild and push the boundaries of what's possible. They simply do so within the bounds set by Gygax when he outlined the rules some four decades ago.

For me, I don't see this as limiting, not at all. I see the B/X game as the version of D&D with infinite possibilities, containing a vast almost endless set of possible worlds. Worlds composed of medieval fantasy, weird magic, strange, alien beings, star spanning science fiction, irradiated post apocalyptic landscapes, twisted graveyards of abysmal horror, spies, crime bosses, desperadoes and cyber-tech geniuses. And AD&D, one of the finest games ever written for the possibilities contained in a certain genre of medieval fantasy. A set of worlds admittedly more limited, but still filled with millions of fantastic possibilities.
at February 29, 2020