Poison is one of the big nerfs to 5th edition. The poisoned condition RAW reads "A poisoned creature has disadvantage on attack rolls and ability checks." Poison in earlier editions was much truer to what poison should actually do to it's victims. If we take a D&D-like fantasy world, we are going to assume that most serious toxins delivered by what we might call "monsters" or giant sized animals are designed to immobilize or kill their opponents. While the 5e rule gets points for ease of use, it suffers as somewhat lackluster in describing the myriad types of toxins against which an adventuring character may be subjected. Smaller sized animals like tiny or even small spiders and biting insects are likely to cause minimal concern for most adventurers. Likely not even disadvantage on all attack rolls and ability checks. Snakes and some certain species of other venomous critters as one may find in our world, could indeed cause the poisoned condition, but very possibly death. 5e has simply removed that possibility from the game. But even real world statistics tell us that of the 5.4 million snakebites world wide about 2 million are envenomed and of those approximately 110,000 die from envenomation. Granted, we are dealing with adventurers and not common folk, but that is also expressed in higher ability scores, proficiency bonuses and better saving throw values.

Now let us consider large, giant or huge spiders and snakes. naturally their venom will be in larger quantities and designed to knock down or kill and jellify larger prey. Prey like adventurers. It just doesn't stand to reason that a single poison condition encompasses the effects of such venomous bites. So, I propose a more useful, "realistic" and somewhat more granular approach to poison in my 5e games. Something like the following is a start:

But, even this doesn't make me entirely happy. I prefer a more nuanced and flavorful approach to poison. Which brings us back to the further adventures of SaltMarsh.
As I said last time, the PCs were headed to Urnella's shack to find further information about the haunting in the old mansion. However, things had proceeded so quickly, I needed to make sure that the smuggler's contact on the town council was made aware of the adventurer's intentions of investigating the smuggler's hideout. So I had the guard at the Town Hall, whom the players had spoke to previously alert the mayor that they were looking for him. When the mayor arrived, the guard informed him, and the Mayor was duly concerned that there were adventurers poking about and especially with rumors of ghosts and hauntings. So Mayor White send Olly Canto, the town crier to hunt the adventurers down and ask them to come back and meet with the Mayor. Meanwhile the Mayor sends the guard for the fellow members of the council, as they would be livid had they not been included. Sonceray and Beck show up just before the character's arrive.
The conversation was rather innocuous, and the players' didn't learn much new--but this move allowed me to plant a few tidbits of foreshadowing. Beck's dismissal of the account entirely, almost discouragement of even looking into it, and his quick exit once it was decided the adventurer's would go ahead with their investigations. The conversation with Urnella afterwards was quite entertaining. Urnella, being the mad old bat she is, no matter that she's harmless, wove all sorts of horror stories and conspiracies about the town. They were sure she was quite mad by the end of it, but they noted several things she mentioned which will become hopefully clear later on as the plot unfolds. And with this they were on their way to the ruined manor just after noon.
The party's entrance into the manor was quiet, if somewhat ominous from the descriptions of the place. I focused on how quiet it was, with only the hollow moaning of the sea breeze through the cracks and holes of the place to be heard. They assiduously checked for traps and were a bit confused the place was so safe to enter--though if they had sought out Pol the Poacher, they might have understood why. At any rate they entered, searched about a bit in the manor, when the Dwarvish Wizard played his character's traits of often mindlessly playing his pan-pipes when he wasn't smoking his tobacco pipe. Since no one was ready it caused everyone to jump as he did so, and I also decided it doubled the chance for wandering monsters. And the two giant rats appeared through a crack in the wall and ceiling in the west hall surprising the young thief Oliver.
This is where the above discussion on poison becomes salient. I love the way that Sinister Secret handles the poisonous critters in the module. I quote here for the rats "Giant rats: these creatures will surprise 4 chances in 6. They are disease carriers: any character bitten by a giant rat has a 5% chance of being infected by disease. If an infected character then fails a saving throw vs. Poison and does not receive a cure disease spell by the third turn after being bitten, the wound will swell and fill with pus; the character will lapse into delirium and will need constant attention by another member of the party. After 1-4 days the character will die if cure disease has still not been given." 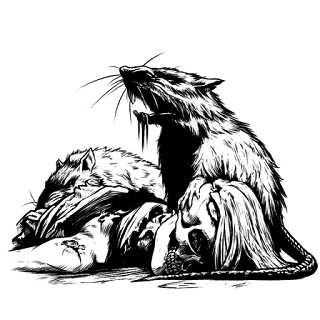 I LOVE that description of how the disease works. And though the rats posed little threat to the characters as a battle, if that disease hits--it's nasty. And that's exactly what happened. The Druid became infected from a leg bite and the whole adventure shifted into a different mode. They actually took care of the rats with little problem. But my description of their nasty yellow green teeth didn't go unheeded. And of course the saving throw tipped them off a bit.
At first I just played it up as a really sore bite, but within ten minutes (1 turn) I noted it was throbbing and tender to the touch; 1 round later as they were exploring the library I told her that her leg was hard to walk on, and when she pulled back her ripped leathers she saw the wound had become swollen and dark. By then she was panicking, but the Cleric, Calix (who isn't really a Cleric, but a thief trying to give up her thieving ways and become worthy to be ordained as a priestess of Zodal; though she had taken magic initiate to grant her access to two Clerical orisons, and sell the fact that she was a Cleric) did not have access to lesser restoration. The party thus retreated to Saltmarsh and the Temple to seek lesser restoration. They managed to get the Druid healed and the next day headed back to the manor.
So it is that today's topic is salient. Should 5e poison rules be fixed? I have chosen to use the poison/disease effects exactly as written in Saltmarsh, instead of the option above. Indeed I have struggled with how to make 5e more "old school" in difficulty, and the poison rules are one. I will expand on this idea in my next entry.
at June 01, 2021